(CBS)
In 1816, the United Provinces of the Rio Plata declared their independence from Spain. Eventually, Bolivia, Paraguay, and Uruguay went their own way, but the area that remained became Argentina.

The country's population and culture were subsequently heavily shaped by immigrants from throughout Europe, but most particularly Italy and Spain, which provided the largest percentage of newcomers from 1860 to 1930. Up until about the mid-20th century, much of Argentina's history was dominated by periods of internal political conflict between Federalists and Unitarians and between civilian and military factions.

After World War II, an era of Peronist authoritarian rule and interference in subsequent governments was followed by a military junta that took power in 1976. Democracy returned in 1983, and has persisted despite numerous challenges, the most formidable of which was a severe economic crisis in 2001-02 that led to violent public protests and the resignation of several interim presidents.

The economy has recovered strongly since bottoming out in 2002. The government renegotiated its public debt in 2005 and paid off its remaining obligations to the IMF in early 2006. 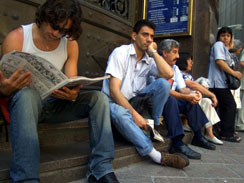 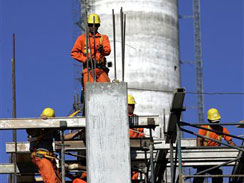 Argentina benefits from rich natural resources, a highly literate population, an export-oriented agricultural sector, and a diversified industrial base. Although one of the world's wealthiest countries 100 years ago, Argentina suffered during most of the 20th century from recurring economic crises, persistent fiscal and current account deficits, high inflation, mounting external debt, and capital flight. Beginning in 1998, with external debt equivalent to more than 400% of annual exports, the economy slowed and ultimately fell into a full-blown depression; investors' fears grew in the wake of Russia's debt default, Brazil's devaluation, and the political discord caused by then-President Carlos MENEM's unpopular efforts to run for a constitutionally prohibited third term. The government of Fernando DE LA RUA, elected President in late 1999, tried several measures to cut the fiscal deficit and instill confidence and received large IMF credit facilities, but nothing worked to revive the economy. Depositors began withdrawing money from the banks in late 2001, and the government responded with strict limits on withdrawals. When street protests turned deadly, DE LA RUA was forced to resign in December 2001. Interim President Adolfo Rodriguez SAA declared a default - the largest in history - on Argentina's foreign debt, but he stepped down only a few days later when he failed to garner political support from the country's governors. Eduardo DUHALDE became President in January 2002 and announced an end to the peso's decade-long 1-to-1 peg to the US dollar. When the peso depreciated and inflation rose, DUHALDE's government froze utility tariffs, curtailed creditors' rights, and imposed high taxes on exports. The economy rebounded strongly from the crisis, inflation started falling, and DUHALDE called for special elections. Nestor KIRCHNER was elected President, taking office in May 2003, and continued the restrictions imposed by DUHALDE. With the reemergence of double-digit inflation in 2005, the KIRCHNER administration pressured businesses into a series of agreements to hold down prices. The government also restructured its debt in 2005 and paid off its IMF obligations in early 2006, reducing Argentina's external debt burden. Real GDP growth averaged 9% during the period 2003-06, bolstering government revenues and keeping the budget in surplus.