The island's economy has been dominated by three main industries.

A 19th century gold rush was followed by prosperity brought on by the opening in 1924 of an oil refinery.

The last decades of the 20th century saw a boom in the tourism industry.

Movement toward full independence was halted at Aruba's request in 1990. 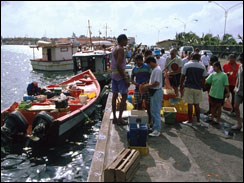 Population:
100,018
note: estimate based on a revision of the base population, fertility, and mortality numbers, as well as a revision of 1985-1999 migration estimates from outmigration to inmigration, which is assumed to continue into the future; the new results are consistent with the 2000 census (July 2007 est.) 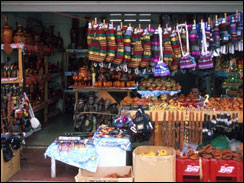 Tourism is the mainstay of the small, open Aruban economy, with offshore banking and oil refining and storage also important. The rapid growth of the tourism sector over the last decade has resulted in a substantial expansion of other activities. Over 1.5 million tourists per year visit Aruba, with 75% of those from the US. Construction continues to boom, with hotel capacity five times the 1985 level. In addition, the country's oil refinery reopened in 1993, providing a major source of employment, foreign exchange earnings, and growth. Tourist arrivals have rebounded strongly following a dip after the 11 September 2001 attacks. The island experiences only a brief low season, and hotel occupancy in 2004 averaged 80%, compared to 68% throughout the rest of the Caribbean. The government has made cutting the budget and trade deficits a high priority.