(CBS)
Lucayan Indians inhabited the islands when Christopher Columbus first set foot in the New World on San Salvador in 1492.

Since attaining independence from the UK in 1973, The Bahamas have prospered through tourism and international banking and investment management.

Because of its geography, the country is a major transshipment point for illegal drugs, particularly shipments to the U.S. and Europe, and its territory is used for smuggling illegal migrants into the U.S.

The Commonwealth of The Bahamas is an English-speaking nation consisting of two thousand cays and seven hundred islands that form an archipelago. It is located in the Atlantic Ocean, east of Florida and the United States, north of Cuba and the Caribbean, and northwest of the British overseas territory of the Turks and Caicos Islands. 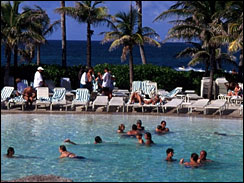 Population:
305,655
note: estimates for this country explicitly take into account the effects of excess mortality due to AIDS; this can result in lower life expectancy, higher infant mortality and death rates, lower population and growth rates, and changes in the distribution of population by age and sex than would otherwise be expected (July 2007 est.) 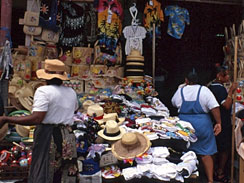 The Bahamas is a stable, developing nation with an economy heavily dependent on tourism and offshore banking. Tourism together with tourism-driven construction and manufacturing accounts for approximately 60% of GDP and directly or indirectly employs half of the archipelago's labor force. Steady growth in tourism receipts and a boom in construction of new hotels, resorts, and residences had led to solid GDP growth in recent years, but the slowdown in the US economy and the attacks of 11 September 2001 held back growth in these sectors in 2001-03. The current government has presided over a period of economic recovery and an upturn in large-scale private sector investments in tourism. Financial services constitute the second-most important sector of the Bahamian economy, accounting for about 15% of GDP. However, since December 2000, when the government enacted new regulations on the financial sector, many international businesses have left The Bahamas. Manufacturing and agriculture together contribute approximately a tenth of GDP and show little growth, despite government incentives aimed at those sectors. Overall growth prospects in the short run rest heavily on the fortunes of the tourism sector, which depends on growth in the US, the source of more than 80% of the visitors.