(CBS)
Bolivia, named after independence fighter Simon BOLIVAR, broke away from Spanish rule in 1825; much of its subsequent history has consisted of a series of nearly 200 coups and countercoups.

In December 2005, Bolivians elected Movement Toward Socialism leader Evo MORALES president - by the widest margin of any leader since the restoration of civilian rule in 1982 - after he ran on a promise to change the country's traditional political class and empower the nation's poor majority.

However, since taking office, his controversial strategies have exacerbated racial and economic tensions between the Amerindian populations of the Andean west and the non-indigenous communities of the eastern lowlands. 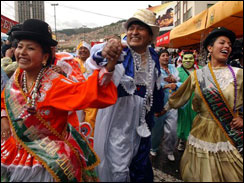 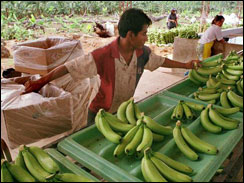 Bolivia, long one of the poorest and least developed Latin American countries, reformed its economy after suffering a disastrous economic crisis in the early 1980s. The reforms spurred real GDP growth, which averaged 4% in the 1990s, and poverty rates fell. Economic growth, however, lagged again beginning in 1999 because of a global slowdown and homegrown factors such as political turmoil, civil unrest, and soaring fiscal deficits, all of which hurt investor confidence. In 2003, violent protests against the pro-foreign investment economic policies of ex-President SANCHEZ DE LOZADA led to his resignation and the cancellation of plans to export Bolivia's newly discovered natural gas reserves to large northern hemisphere markets. In 2005, the government passed a controversial natural gas law that imposed significantly higher taxes on the oil and gas firms and required production firms to sign new operating contracts, which were completed in October 2006. Bolivian officials are in the process of revamping the defunct state-owned oil company and acquiring majority ownership of five gas production, transportation, refining, and storage companies. The MORALES administration plans to increase state control over other sectors as well, including mining, electricity, telecommunications, transportation, and forestry. Real GDP growth in 2003-06 - helped by increased demand for natural gas in neighboring Brazil - was positive, but still below the levels seen during the 1990s. Bolivia's fiscal position has improved in recent years, and the country had a record 6% fiscal surplus for 2006. In 2005, the G8 announced a $2 billion debt-forgiveness plan over the next few decades. The International Monetary Fund and the World Bank forgave a total of approximately $1.8 billion of Bolivian debt in 2006 that has helped reduce fiscal pressures on the government.