(CBS)
Following three centuries under the rule of Portugal, Brazil became an independent nation in 1822 and a republic in 1889.

By far the largest and most populous country in South America, Brazil overcame more than half a century of military intervention in the governance of the country when in 1985 the military regime peacefully ceded power to civilian rulers.

Brazil continues to pursue industrial and agricultural growth and development of its interior. 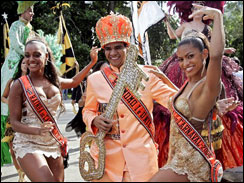 Population:
190,010,647
note: Brazil conducted a census in August 2000, which reported a population of 169,799,170; that figure was about 3.3% lower than projections by the US Census Bureau, and is close to the implied underenumeration of 4.6% for the 1991 census; estimates for this country explicitly take into account the effects of excess mortality due to AIDS; this can result in lower life expectancy, higher infant mortality and death rates, lower population and growth rates, and changes in the distribution of population by age and sex than would otherwise be expected (July 2007 est.) 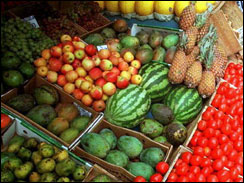 Characterized by large and well-developed agricultural, mining, manufacturing, and service sectors, Brazil's economy outweighs that of all other South American countries and is expanding its presence in world markets. From 2001-03 real wages fell and Brazil's economy grew, on average only 2.2% per year, as the country absorbed a series of domestic and international economic shocks. That Brazil absorbed these shocks without financial collapse is a tribute to the resiliency of the Brazilian economy and the economic program put in place by former President CARDOSO and strengthened by President LULA DA SILVA. Since 2004, Brazil has enjoyed continued growth that yielded increases in employment and real wages. The three pillars of the economic program are a floating exchange rate, an inflation-targeting regime, and tight fiscal policy, initially reinforced by a series of IMF programs. The currency depreciated sharply in 2001 and 2002, which contributed to a dramatic current account adjustment; from 2003 to 2006, Brazil ran record trade surpluses and recorded its first current account surpluses since 1992. Productivity gains - particularly in agriculture - also contributed to the surge in exports. While economic management has been good, there remain important economic vulnerabilities. The most significant are debt-related: the government's largely domestic debt increased steadily from 1994 to 2003 - straining government finances - before falling as a percentage of GDP beginning in 2003. Brazil improved its debt profile in 2006 by shifting its debt burden toward real denominated and domestically held instruments. LULA DA SILVA restated his commitment to fiscal responsibility by maintaining the country's primary surplus during the 2006 election. Following his second inauguration, LULA DA SILVA announced a package of further economic reforms to reduce taxes and increase public investment. A major challenge will be to maintain sufficient growth to generate employment and reduce the government debt burden.

Brazil Plane Crash
A passenger jet crashed and burst into flames in Sao Paulo after skidding off a runway and into buildings.