(CBS)
First inhabited by Arawak and later by Carib Indians, the Virgin Islands were settled by the Dutch in 1648 and then annexed by the English in 1672.

The islands were part of the British colony of the Leeward Islands from 1872-1960; they were granted autonomy in 1967.

The economy is closely tied to the larger and more populous U.S. Virgin Islands to the west; the U.S. dollar is the legal currency.

The British Virgin Islands consist of the main islands of Tortola, Virgin Gorda, Anegada and Jost Van Dyke, along with over 50 other smaller islands and cays. 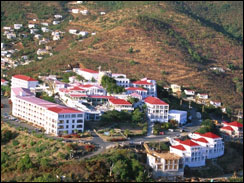 The economy, one of the most stable and prosperous in the Caribbean, is highly dependent on tourism, generating an estimated 45% of the national income. An estimated 820,000 tourists, mainly from the US, visited the islands in 2005. In the mid-1980s, the government began offering offshore registration to companies wishing to incorporate in the islands, and incorporation fees now generate substantial revenues. Roughly 400,000 companies were on the offshore registry by yearend 2000. The adoption of a comprehensive insurance law in late 1994, which provides a blanket of confidentiality with regulated statutory gateways for investigation of criminal offenses, made the British Virgin Islands even more attractive to international business. Livestock raising is the most important agricultural activity; poor soils limit the islands' ability to meet domestic food requirements. Because of traditionally close links with the US Virgin Islands, the British Virgin Islands has used the US dollar as its currency since 1959.