(CBS)
The Cayman Islands were colonized from Jamaica by the British during the 18th and 19th centuries, and were administered by Jamaica after 1863.

In 1959, the islands became a territory within the Federation of the West Indies, but when the Federation dissolved in 1962, the Cayman Islands chose to remain a British dependency.

The Cayman Islands are located in the western Caribbean Sea, comprising the islands of Grand Cayman, Cayman Brac, and Little Cayman.

It is a global offshore financial services centre and one of the leading tourist scuba diving destinations in the world. 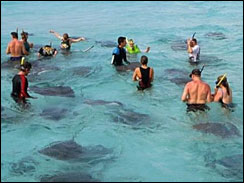 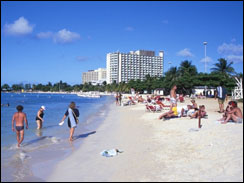 With no direct taxation, the islands are a thriving offshore financial center. More than 68,000 companies were registered in the Cayman Islands as of 2003, including almost 500 banks, 800 insurers, and 5,000 mutual funds. A stock exchange was opened in 1997. Tourism is also a mainstay, accounting for about 70% of GDP and 75% of foreign currency earnings. The tourist industry is aimed at the luxury market and caters mainly to visitors from North America. Total tourist arrivals exceeded 2.1 million in 2003, with about half from the US. About 90% of the islands' food and consumer goods must be imported. The Caymanians enjoy one of the highest outputs per capita and one of the highest standards of living in the world.