(CBS)
Colombia was one of the three countries that emerged from the collapse of Gran Colombia in 1830 (the others are Ecuador and Venezuela). A 40-year conflict between government forces and anti-government insurgent groups and illegal paramilitary groups - both heavily funded by the drug trade - escalated during the 1990s.

The insurgents lack the military or popular support necessary to overthrow the government, and violence has been decreasing since about 2002, but insurgents continue attacks against civilians and large swaths of the countryside are under guerrilla influence.

More than 32,000 former paramilitaries had demobilized by the end of 2006 and the United Self Defense Forces of Colombia (AUC) as a formal organization had largely ceased to function. Still, some renegades continued to engage in criminal activities.

The Colombian Government has stepped up efforts to reassert government control throughout the country, and now has a presence in every one of its municipalities. However, neighboring countries worry about the violence spilling over their borders. 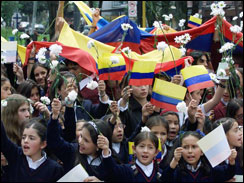 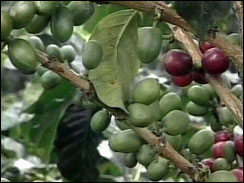 Colombia's economy has experienced positive growth over the past three years despite a serious armed conflict. The economy continues to improve in part because of austere government budgets, focused efforts to reduce public debt levels, an export-oriented growth strategy, an improved security situation in the country, and high commodity prices. Ongoing economic problems facing President URIBE range from reforming the pension system to reducing high unemployment, and to achieving congressional passage of a fiscal transfers reform; furthermore, new exploration is needed to offset declining oil production. However, the government's economic policy, democratic security strategy, and the signing of a free trade agreement with the US have engendered a growing sense of confidence in the economy, particularly within the business sector.