(CBS)
Dominica was the last of the Caribbean islands to be colonized by Europeans due chiefly to the fierce resistance of the native Caribs.

France ceded possession to Great Britain in 1763, which made the island a colony in 1805.

In 1980, two years after independence, Dominica's fortunes improved when a corrupt and tyrannical administration was replaced by that of Mary Eugenia Charles, the first female prime minister in the Caribbean, who remained in office for 15 years.

Some 3,000 Carib Indians still living on Dominica are the only pre-Columbian population remaining in the eastern Caribbean.

Dominica has been nicknamed the "Nature Isle of the Caribbean" due to its seemingly unspoiled natural beauty. It is one of the youngest islands in the Lesser Antilles, and it is still being formed by geothermal-volcanic activity.

The island features lush mountainous rainforests, home of many rare plant, animal and bird species. There are xeric areas in some of the western coastal regions but heavy rainfall can be expected inland. The Sisserou parrot which is the island's national bird, is featured on the national flag. Dominica's economy is heavily dependent on both tourism and agriculture. 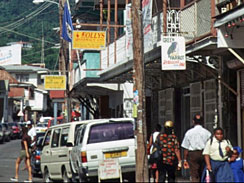 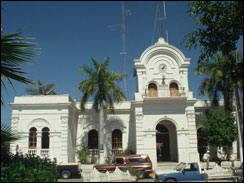 The Dominican economy depends on agriculture, primarily bananas, and remains highly vulnerable to climatic conditions and international economic developments. Tourism has increased as the government seeks to promote Dominica as an "ecotourism" destination. Development of the tourism industry remains difficult, however, because of the rugged coastline, lack of beaches, and the absence of an international airport. The government began a comprehensive restructuring of the economy in 2003 - including elimination of price controls, privatization of the state banana company, and tax increases - to address Dominica's economic crisis and to meet IMF targets. In order to diversify the island's production base, the government is attempting to develop an offshore financial sector and is planning to construct an oil refinery on the eastern part of the island.