(CBS)
What is now Ecuador formed part of the northern Inca Empire until the Spanish conquest in 1533.

Quito became a seat of Spanish colonial government in 1563 and part of the Viceroyalty of New Granada in 1717.

The territories of the Viceroyalty - New Granada (Colombia), Venezuela, and Quito - gained their independence between 1819 and 1822 and formed a federation known as Gran Colombia. When Quito withdrew in 1830, the traditional name was changed in favor of the "Republic of the Equator."

Between 1904 and 1942, Ecuador lost territories in a series of conflicts with its neighbors.

Although Ecuador marked 25 years of civilian governance in 2004, the period has been marred by political instability.

Protests in Quito have contributed to the mid-term ouster of Ecuador's last three democratically elected Presidents. 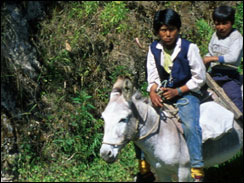 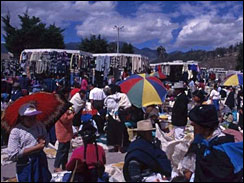 Ecuador has substantial petroleum resources, which have accounted for 40% of the country's export earnings and one-third of central government budget revenues in recent years. Consequently, fluctuations in world market prices can have a substantial domestic impact. In the late 1990s, Ecuador suffered its worst economic crisis, with natural disasters and sharp declines in world petroleum prices driving Ecuador's economy into free fall in 1999. Real GDP contracted by more than 6%, with poverty worsening significantly. The banking system also collapsed, and Ecuador defaulted on its external debt later that year. The currency depreciated by some 70% in 1999, and, on the brink of hyperinflation, the MAHAUD government announced it would dollarize the economy. A coup, however, ousted MAHAUD from office in January 2000, and after a short-lived junta failed to garner military support, Vice President Gustavo NOBOA took over the presidency. In March 2000, Congress approved a series of structural reforms that also provided the framework for the adoption of the US dollar as legal tender. Dollarization stabilized the economy, and growth returned to its pre-crisis levels in the years that followed. Under the administration of Lucio GUTIERREZ - January 2003 to April 2005 - Ecuador benefited from higher world petroleum prices. However, the government under Alfredo PALACIO reversed economic reforms that reduced Ecuador's vulnerability to petroleum price swings and financial crises, allowing the central government greater access to oil windfalls and disbursing surplus retirement funds.

Exchange rates:
the US dollar is used; the sucre was eliminated in 2000