(CBS)
Although ultimately a victor in World Wars I and II, France suffered extensive losses in its empire, wealth, manpower, and rank as a dominant nation-state.

Nevertheless, France today is one of the most modern countries in the world and is a leader among European nations.

Since 1958, it has constructed a hybrid presidential-parliamentary governing system resistant to the instabilities experienced in earlier more purely parliamentary administrations.

In recent years, its reconciliation and cooperation with Germany have proved central to the economic integration of Europe, including the introduction of a common exchange currency, the euro, in January 1999.

At present, France is at the forefront of efforts to develop the EU's military capabilities to supplement progress toward an EU foreign policy. 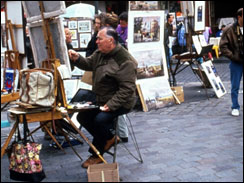 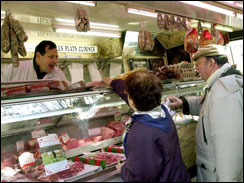 France is in the midst of transition from a well-to-do modern economy that has featured extensive government ownership and intervention to one that relies more on market mechanisms.

The government has partially or fully privatized many large companies, banks, and insurers, and has ceded stakes in such leading firms as Air France, France Telecom, Renault, and Thales. It maintains a strong presence in some sectors, particularly power, public transport, and defense industries. The telecommunications sector is gradually being opened to competition.

France's leaders remain committed to a capitalism in which they maintain social equity by means of laws, tax policies, and social spending that reduce income disparity and the impact of free markets on public health and welfare.

Widespread opposition to labor reform has in recent years hampered the government's ability to revitalize the economy. During 2007-08, the government implemented several important labor reforms, including a de facto extension of the 35-hour workweek by allowing employees to work longer overtime hours.

During 2009, the government is expected to delay or even renounce other reform efforts due to the on-going financial crisis. GDP growth dropped to 0.7% in 2008; the French government plans to increase public investment and continue injecting capital into the banking sector to alleviate the negative effects of the crisis during 2009.

As a result of lower fiscal revenues and increased expenditures the general government deficit is expected to exceed the eurozone's ceiling 3% of GDP. France's tax burden remains one of the highest in Europe - at nearly 50% of GDP in 2005.

With at least 75 million foreign tourists per year, France is the most visited country in the world and maintains the third largest income in the world from tourism.

Obama Storms The Continent
Travels to France and Germany for NATO Summit marking 60th anniversary of the organization.