(CBS)
French Guiana was originally inhabited by a number of indigenous American peoples.

Settled by the French during the 17th century, it was the site of penal settlements from 1852 until 1951; a border dispute with Brazil arose in the late nineteenth century over a vast area of jungle, leading to the short-lived pro-French independent state of Counani in the disputed territory and some fighting between settlers, before the dispute was resolved largely in favour of Brazil by the arbitration of the Swiss government.

The 1970s saw the settlement of Hmong refugees from Laos. A movement for increased autonomy from France gained momentum in the 1970's and 80's. Protests by those calling for more autonomy have become increasingly vocal; demonstrations in 1996, 1997 and 2000 all ended in violence.

Its position in South America made it a suitable place for France to launch troops from should the need ever arise.

The European Space Agency launches its communication satellites from Kourou. 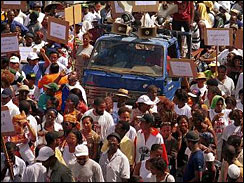 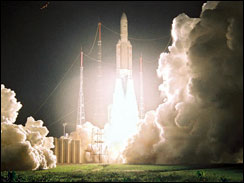 The economy is tied closely to the much larger French economy through subsidies and imports. Besides the French space center at Kourou (which accounts for 25% of GDP), fishing and forestry are the most important economic activities. Forest and woodland cover 90% of the country. The large reserves of tropical hardwoods, not fully exploited, support an expanding sawmill industry that provides sawn logs for export. Cultivation of crops is limited to the coastal area, where the population is largely concentrated; rice and manioc are the major crops. French Guiana is heavily dependent on imports of food and energy. Unemployment is a serious problem, particularly among younger workers.