(CBS)
Originally a Dutch colony in the 17th century, by 1815 Guyana had become a British possession.

The abolition of slavery led to black settlement of urban areas and the importation of indentured servants from India to work the sugar plantations.

This ethnocultural divide has persisted and has led to turbulent politics.

Guyana achieved independence from the UK in 1966, and since then it has been ruled mostly by socialist-oriented governments.

In 1992, Cheddi JAGAN was elected president in what is considered the country's first free and fair election since independence.

After his death five years later, his wife, Janet JAGAN, became president but resigned in 1999 due to poor health. 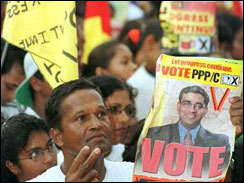 Population:
769,095
note: estimates for this country explicitly take into account the effects of excess mortality due to AIDS; this can result in lower life expectancy, higher infant mortality and death rates, lower population and growth rates, and changes in the distribution of population by age and sex than would otherwise be expected (July 2007 est.) 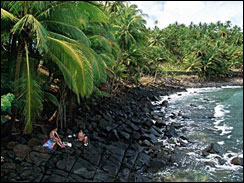 The Guyanese economy exhibited moderate economic growth in 2001-02, based on expansion in the agricultural and mining sectors, a more favorable atmosphere for business initiatives, a more realistic exchange rate, fairly low inflation, and the continued support of international organizations. Chronic problems include a shortage of skilled labor and a deficient infrastructure. The government is juggling a sizable external debt against the urgent need for expanded public investment. The Inter-American Development Bank in November 2006 canceled Guyana's nearly $400 million debt with the Bank. The bauxite mining sector should benefit in the near term from restructuring and partial privatization. Export earnings from agriculture and mining have fallen sharply, while the import bill has risen, driven by higher energy prices. Guyana's entrance into the Caricom Single Market and Economy (CSME) in January 2006 will broaden the country's export market, primarily in the raw materials sector.