(CBS)
The native Taino Amerindians - who inhabited the island of Hispaniola when it was discovered by COLUMBUS in 1492 - were virtually annihilated by Spanish settlers within 25 years.

In the early 17th century, the French established a presence on Hispaniola, and in 1697, Spain ceded to the French the western third of the island, which later became Haiti. The French colony, based on forestry and sugar-related industries, became one of the wealthiest in the Caribbean, but only through the heavy importation of African slaves and considerable environmental degradation.

In the late 18th century, Haiti's nearly half million slaves revolted under Toussaint L'OUVERTURE. After a prolonged struggle, Haiti became the first black republic to declare its independence in 1804. The poorest country in the Western Hemisphere, Haiti has been plagued by political violence for most of its history.

After an armed rebellion led to the departure of President Jean-Bertrand ARISTIDE in February 2004, an interim government took office to organize new elections under the auspices of the United Nations Stabilization Mission in Haiti (MINUSTAH). Continued violence and technical delays prompted repeated postponements, but Haiti finally did inaugurate a democratically elected president and parliament in May of 2006.

Population:
9,035,536
note: estimates for this country explicitly take into account the effects of excess mortality due to AIDS; this can result in lower life expectancy, higher infant mortality and death rates, lower population and growth rates, and changes in the distribution of population by age and sex than would otherwise be expected (July 2009 est.) 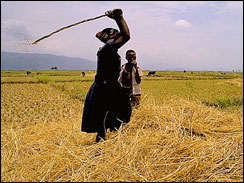 Haiti is the poorest country in the Western Hemisphere with 80% of the population living under the poverty line and 54% in abject poverty. Two-thirds of all Haitians depend on the agricultural sector, mainly small-scale subsistence farming, and remain vulnerable to damage from frequent natural disasters, exacerbated by the country's widespread deforestation. While the economy has recovered in recent years, registering positive growth since 2005, four tropical storms in 2008 severely damaged the transportation infrastructure and agricultural sector. US economic engagement under the Haitian Hemispheric Opportunity through Partnership Encouragement (HOPE) Act, passed in December 2006, has boosted apparel exports and investment by providing tariff-free access to the US. HOPE II, passed in October 2008, has further improved the export environment for the apparel sector by extending preferences to 2018; the apparel sector accounts for two-thirds of Haitian exports and nearly one-tenth of GDP. Remittances are the primary source of foreign exchange, equaling nearly a quarter of GDP and more than twice the earnings from exports. Haiti suffers from high inflation, a lack of investment because of insecurity and limited infrastructure, and a severe trade deficit. In 2005, Haiti paid its arrears to the World Bank, paving the way for reengagement with the Bank. Haiti is expected to receive debt forgiveness for about $525 million of its debt through the Highly-Indebted Poor Country (HIPC) initiative by mid-2009. The government relies on formal international economic assistance for fiscal sustainability.

Unemployment rate: N/A%
widespread unemployment and underemployment; more than two-thirds of the labor force do not have formal jobs

Haitian Earthquake
Photos from the Devastating Earthquake in Haiti.

Haiti's Quake Aftermath
The aftermath of a 7.0 magnitude earthquake that rocked Haiti.