(CBS)
Italy became a nation-state in 1861 when the regional states of the peninsula, along with Sardinia and Sicily, were united under King Victor EMMANUEL II. prosperous north.

An era of parliamentary government came to a close in the early 1920s when Benito MUSSOLINI established a Fascist dictatorship. His alliance with Nazi Germany led to Italy's defeat in World War II. prosperous north.

A democratic republic replaced the monarchy in 1946 and economic revival followed. Italy was a charter member of NATO and the European Economic Community (EEC). prosperous north.

It has been at the forefront of European economic and political unification, joining the Economic and Monetary Union in 1999. prosperous north. 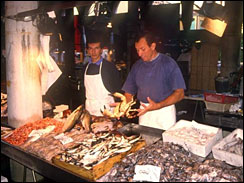 Italy has a diversified industrial economy, which is divided into a developed industrial north, dominated by private companies, and a less-developed, welfare-dependent, agricultural south, with high unemployment.

The Italian economy is driven in large part by the manufacture of high-quality consumer goods produced by small and medium-sized enterprises. Italy also has a sizable underground economy, which by some estimates accounts for as much as 15% of GDP. These activities are most common within the agriculture, construction, and service sectors.

Italy has moved slowly on implementing needed structural reforms, such as lightening the high tax burden and overhauling Italy's rigid labor market and over-generous pension system and these conditions will be exacerbated by the recent global financial crisis.

The Italian government is seeking to rein in government spending, but the leadership faces a severe economic constraint: Italy's official debt remains above 100% of GDP, and the fiscal deficit - 1.5% of GDP in 2007 - could approach 3% in 2009 as political pressure to stimulate the economy and the costs of servicing Italy's debt rise.

The economy will continue to contract through 2009 as the global demand for exports drop.