(CBS)
Founded in 963, Luxembourg became a grand duchy in 1815 and an independent state under the Netherlands.

It lost more than half of its territory to Belgium in 1839, but gained a larger measure of autonomy.

Full independence was attained in 1867.

Overrun by Germany in both World Wars, it ended its neutrality in 1948 when it entered into the Benelux Customs Union and when it joined NATO the following year.

In 1957, Luxembourg became one of the six founding countries of the European Economic Community (later the European Union), and in 1999 it joined the euro currency area.

The city of Luxembourg, the capital and largest city, is the seat of several institutions and agencies of the European Union.

Luxembourg lies on the cultural divide between Romance Europe and Germanic Europe, borrowing customs from each of the distinct traditions. Luxembourg is a trilingual country; French, German, and Luxembourgish are official languages.

Although a secular state, Luxembourg is predominantly Roman Catholic. 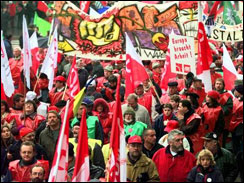 Ethnic groups:
Celtic base (with French and German blend), Portuguese, Italian, Slavs (from Montenegro, Albania, and Kosovo) and European (guest and resident workers) 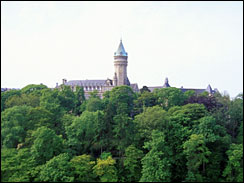 This stable, high-income economy - benefiting from its proximity to France, Belgium, and Germany - features solid growth, low inflation, and low unemployment. The industrial sector, initially dominated by steel, has become increasingly diversified to include chemicals, rubber, and other products. Growth in the financial sector, which now accounts for about 28% of GDP, has more than compensated for the decline in steel. Most banks are foreign-owned and have extensive foreign dealings. Agriculture is based on small family-owned farms. The economy depends on foreign and cross-border workers for about 60% of its labor force. Although Luxembourg, like all EU members, has suffered from the global economic slump, the country enjoys an extraordinarily high standard of living - GDP per capita ranks second in the world.