(CBS)
The Genoese built a fortress on the site of present-day Monaco in 1215.

The current ruling Grimaldi family secured control in the late 13th century, and a principality was established in 1338.

Economic development was spurred in the late 19th century with a railroad linkup to France and the opening of a casino.

Since then, the principality's mild climate, splendid scenery, and gambling facilities have made Monaco world famous as a tourist and recreation center. 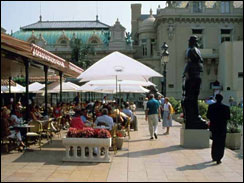 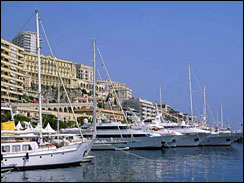 Monaco, bordering France on the Mediterranean coast, is a popular resort, attracting tourists to its casino and pleasant climate. In 2001, a major construction project extended the pier used by cruise ships in the main harbor. The principality has successfully sought to diversify into services and small, high-value-added, nonpolluting industries. The state has no income tax and low business taxes and thrives as a tax haven both for individuals who have established residence and for foreign companies that have set up businesses and offices. The state retains monopolies in a number of sectors, including tobacco, the telephone network, and the postal service. Living standards are high, roughly comparable to those in prosperous French metropolitan areas.
GDP (purchasing power parity):
$976.3 million
note: Monaco does not publish national income figures; the estimates are extremely rough (2006 est.)