(CBS)
Two centuries of Viking raids into Europe tapered off following the adoption of Christianity by King Olav Tryggvason in 994. Conversion of the Norwegian kingdom occurred over the next several decades. In 1397, Norway was absorbed into a union with Denmark that lasted more than four centuries.

In 1814, Norwegians resisted the cession of their country to Sweden and adopted a new constitution. Sweden then invaded Norway but agreed to let Norway keep its constitution in return for accepting the union under a Swedish king. Rising nationalism throughout the 19th century led to a 1905 referendum granting Norway independence.

Although Norway remained neutral in World War I, it suffered heavy losses to its shipping. Norway proclaimed its neutrality at the outset of World War II, but was nonetheless occupied for five years by Nazi Germany (1940-45).

In 1949, neutrality was abandoned and Norway became a member of NATO. Discovery of oil and gas in adjacent waters in the late 1960s boosted Norway's economic fortunes. The current focus is on containing spending on the extensive welfare system and planning for the time when petroleum reserves are depleted. In referenda held in 1972 and 1994, Norway rejected joining the EU. 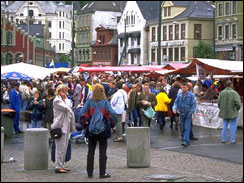 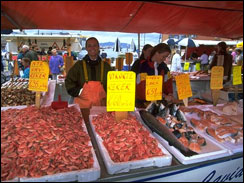 The Norwegian economy is a prosperous bastion of welfare capitalism, featuring a combination of free market activity and government intervention. The government controls key areas, such as the vital petroleum sector, through large-scale state enterprises. The country is richly endowed with natural resources - petroleum, hydropower, fish, forests, and minerals - and is highly dependent on its oil production and international oil prices, with oil and gas accounting for one-third of exports. Only Saudi Arabia and Russia export more oil than Norway. Norway opted to stay out of the EU during a referendum in November 1994; nonetheless, as a member of the European Economic Area, it contributes sizably to the EU budget. The government has moved ahead with privatization. Although Norwegian oil production peaked in 2000, natural gas production is still rising. Norwegians realize that once their gas production peaks they will eventually face declining oil and gas revenues; accordingly, Norway has been saving its oil-and-gas-boosted budget surpluses in a Government Petroleum Fund, which is invested abroad and now is valued at more than $250 billion. After lackluster growth of less than 1% in 2002-03, GDP growth picked up to 3-4% in 2004-06. Norway's economy remains buoyant. Domestic economic activity is, and will continue to be, the main driver of growth, supported by high consumer confidence and strong investment spending in the offshore oil and gas sector.