(CBS)
Explored and settled by the Spanish in the 16th century, Panama broke with Spain in 1821 and joined a union of Colombia, Ecuador, and Venezuela - named the Republic of Gran Colombia. When the latter dissolved in 1830, Panama remained part of Colombia.

With US backing, Panama seceded from Colombia in 1903 and promptly signed a treaty with the US allowing for the construction of a canal and US sovereignty over a strip of land on either side of the structure (the Panama Canal Zone).

The Panama Canal was built by the US Army Corps of Engineers between 1904 and 1914. In 1977, an agreement was signed for the complete transfer of the Canal from the US to Panama by the end of the century. Certain portions of the Zone and increasing responsibility over the Canal were turned over in the subsequent decades. With US help, dictator Manuel NORIEGA was deposed in 1989.

The entire Panama Canal, the area supporting the Canal, and remaining US military bases were transferred to Panama by the end of 1999. In October 2006, Panamanians approved an ambitious plan to expand the Canal.

The project, which began in 2007 and could double the Canal's capacity, is expected to be completed in 2014-15. 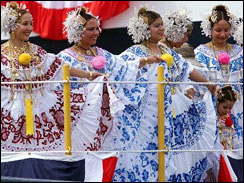 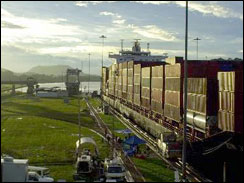 Storm Tracker
Follow all the storms this season with satellite images, warnings and wind speed charts.