(CBS)
In the disastrous War of the Triple Alliance (1865-70) - between Paraguay and Argentina, Brazil, and Uruguay - Paraguay lost two-thirds of all adult males and much of its territory.

It stagnated economically for the next half century.

In the Chaco War of 1932-35, large, economically important areas were won from Bolivia.

The 35-year military dictatorship of Alfredo STROESSNER was overthrown in 1989, and, despite a marked increase in political infighting in recent years, relatively free and regular presidential elections have been held since then. 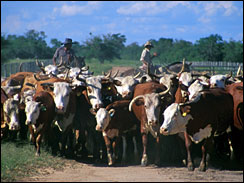 Landlocked Paraguay has a market economy marked by a large informal sector. This sector features both reexport of imported consumer goods to neighboring countries, as well as the activities of thousands of microenterprises and urban street vendors. Because of the importance of the informal sector, accurate economic measures are difficult to obtain. A large percentage of the population derives its living from agricultural activity, often on a subsistence basis. On a per capita basis, real income has stagnated at 1980 levels. Most observers attribute Paraguay's poor economic performance to political uncertainty, corruption, lack of progress on structural reform, substantial internal and external debt, and deficient infrastructure. Aided by a firmer exchange rate and perhaps a greater confidence in the economic policy of the DUARTE FRUTOS administration, the economy rebounded between 2003 and 2006, posting modest growth each year.