(CBS)
The principalities of Wallachia and Moldavia - for centuries under the suzerainty of the Turkish Ottoman Empire - secured their autonomy in 1856; they united in 1859 and a few years later adopted the new name of Romania. The country gained recognition of its independence in 1878. It joined the Allied Powers in World War I and acquired new territories - most notably Transylvania - following the conflict.

In 1940, Romania allied with the Axis powers and participated in the 1941 German invasion of the USSR. Three years later, overrun by the Soviets, Romania signed an armistice. The post-war Soviet occupation led to the formation of a Communist "people's republic" in 1947 and the abdication of the king.

The decades-long rule of dictator Nicolae Ceausescu, who took power in 1965, and his Securitate police state became increasingly oppressive and draconian through the 1980s.

Ceausescu was overthrown and executed in late 1989. Former Communists dominated the government until 1996 when they were swept from power. Romania joined NATO in 2004 and the EU in 2007. 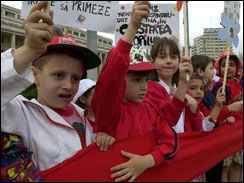 Religions:
Eastern Orthodox (including all sub-denominations) 86.8%, Protestant (various denominations including Reformate and Pentecostal) 7.5%, Roman Catholic 4.7%, other (mostly Muslim) and unspecified 0.9%, none 0.1% (2002 census) 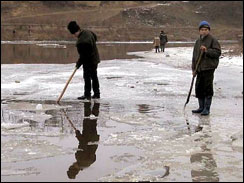 Romania began the transition from Communism in 1989 with a largely obsolete industrial base and a pattern of output unsuited to the country's needs. The country emerged in 2000 from a punishing three-year recession thanks to strong demand in EU export markets. Despite the global slowdown in 2001-02, strong domestic activity in construction, agriculture, and consumption have kept GDP growth above 4%. However, macroeconomic gains have only recently started to spur creation of a middle class and address Romania's widespread poverty, while corruption and red tape continue to handicap the business environment. Romanian government confidence in continuing disinflation was underscored by its currency revaluation in 2005, making 10,000 "old" lei equal 1 "new" leu. The economy grew at 6.4% in 2006, the strongest growth in the last decade. Romania joined the European Union on 1 January 2007, and the IMF has praised the country's recent reform efforts in preparation for EU accession.