(CBS)
Founded in the 12th century, the Principality of Muscovy, was able to emerge from over 200 years of Mongol domination (13th-15th centuries) and to gradually conquer and absorb surrounding principalities.

In the early 17th century, a new Romanov Dynasty continued this policy of expansion across Siberia to the Pacific. Under PETER I (ruled 1682-1725), hegemony was extended to the Baltic Sea and the country was renamed the Russian Empire. During the 19th century, more territorial acquisitions were made in Europe and Asia.

Defeat in the Russo-Japanese War of 1904-05 contributed to the Revolution of 1905, which resulted in the formation of a parliament and other reforms. Repeated devastating defeats of the Russian army in World War I led to widespread rioting in the major cities of the Russian Empire and to the overthrow in 1917 of the imperial household.

The Communists under Vladimir LENIN seized power soon after and formed the USSR. The brutal rule of Iosif STALIN (1928-53) strengthened Communist rule and Russian dominance of the Soviet Union at a cost of tens of millions of lives.

The Soviet economy and society stagnated in the following decades until General Secretary Mikhail GORBACHEV (1985-91) introduced glasnost (openness) and perestroika (restructuring) in an attempt to modernize Communism, but his initiatives inadvertently released forces that by December 1991 splintered the USSR into Russia and 14 other independent republics.

Since then, Russia has shifted its post-Soviet democratic ambitions in favor of a centralized semi-authoritarian state whose legitimacy is buttressed, in part, by carefully managed national elections, former President PUTIN's genuine popularity, and the prudent management of Russia's windfall energy wealth. Russia has severely disabled a Chechen rebel movement, although violence still occurs throughout the North Caucasus. 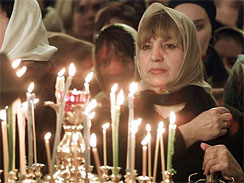 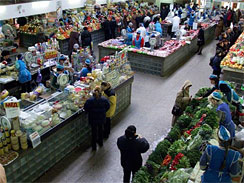 Russia ended 2008 with GDP growth of 6.0%, following 10 straight years of growth averaging 7% annually since the financial crisis of 1998. Over the last six years, fixed capital investment growth and personal income growth have averaged above 10%, but both grew at slower rates in 2008.


Growth in 2008 was driven largely by non-tradable services and domestic manufacturing, rather than exports. During the past decade, poverty and unemployment declined steadily and the middle class continued to expand. Russia also improved its international financial position, running balance of payments surpluses since 2000.


Foreign exchange reserves grew from $12 billion in 1999 to almost $600 billion by end July 2008, which include $200 billion in two sovereign wealth funds: a reserve fund to support budgetary expenditures in case of a fall in the price of oil and a national welfare fund to help fund pensions and infrastructure development. Total foreign debt is approximately one-third of GDP. The state component of foreign debt has declined, but commercial short-term debt to foreigners has risen strongly. These positive trends began to reverse in the second half of 2008. Investor concerns over the Russia-Georgia conflict, corporate governance issues, and the global credit crunch in September caused the Russian stock market to fall by roughly 70%, primarily due to margin calls that were difficult for many Russian companies to meet.


The global crisis also affected Russia's banking system, which faced liquidity problems. Moscow responded quickly in early October 2008, initiating a rescue plan of over $200 billion that was designed to increase liquidity in the financial sector, to help firms refinance foreign debt, and to support the stock market.


The government also unveiled a $20 billion tax cut plan and other safety nets for society and industry. Meanwhile, a 70% drop in the price of oil since mid-July further exacerbated imbalances in external accounts and the federal budget. In mid-November, mini-devaluations of the currency by the Central Bank caused increased capital flight and froze domestic credit markets, resulting in growing unemployment, wage arrears, and a severe drop in production.


Foreign exchange reserves dropped to around $435 billion by end 2008, as the Central Bank defended an overvalued ruble. In the first year of his term, President MEDVEDEV outlined a number of economic priorities for Russia including improving infrastructure, innovation, investment, and institutions; reducing the state's role in the economy; reforming the tax system and banking sector; developing one of the biggest financial centers in the world, combating corruption, and improving the judiciary.


The Russian government needs to diversify the economy further, as energy and other raw materials still dominate Russian export earnings and federal budget receipts. Russia's infrastructure requires large investments and must be replaced or modernized if the country is to achieve broad-based economic growth. Corruption, lack of trust in institutions, and more recently, exchange rate uncertainty and the global economic crisis continue to dampen domestic and foreign investor sentiment.


Russia has made some progress in building the rule of law, the bedrock of a modern market economy, but much work remains on judicial reform. Moscow continues to seek accession to the WTO and has made some progress, but its timeline for entry into the organization continues to slip, and the negotiating atmosphere has soured in the wake of the Georgia and global economic crises.