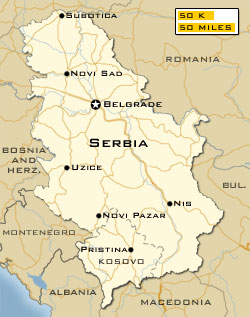 (CBS)
The Kingdom of Serbs, Croats, and Slovenes was formed in 1918; its name was changed to Yugoslavia in 1929. Various paramilitary bands resisted Nazi Germany's occupation and division of Yugoslavia from 1941 to 1945, but fought each other and ethnic opponents as much as the invaders. The military and political movement headed by Josip Tito (Partisans) took full control of Yugoslavia when German and Croatian separatist forces were defeated in 1945. Although Communist, Tito's new government and his successors (he died in 1980) managed to steer their own path between the Warsaw Pact nations and the West for the next four and a half decades. In 1989, Slobodan Milosevic became president of the Serbian Republic and his ultranationalist calls for Serbian domination led to the violent breakup of Yugoslavia along ethnic lines.

In 1991, Croatia, Slovenia, and Macedonia declared independence, followed by Bosnia in 1992. The remaining republics of Serbia and Montenegro declared a new Federal Republic of Yugoslavia (FRY) in April 1992 and under MILOSEVIC's leadership, Serbia led various military campaigns to unite ethnic Serbs in neighboring republics into a "Greater Serbia." These actions led to Yugoslavia being ousted from the UN in 1992, but Serbia continued its - ultimately unsuccessful - campaign until signing the Dayton Peace Accords in 1995. Milosevic kept tight control over Serbia and eventually became president of the FRY in 1997. In 1998, a small-scale ethnic Albanian insurgency in the formerly autonomous Serbian province of Kosovo provoked a Serbian counterinsurgency campaign that resulted in massacres and massive expulsions of ethnic Albanians living in Kosovo by FRY forces and Serb paramilitaries.

The Milosevic government's rejection of a proposed international settlement led to NATO's bombing of Serbia in the spring of 1999 and to the eventual withdrawal of Serbian military and police forces from Kosovo in June 1999. UNSC Resolution 1244 in June 1999 authorized the stationing of a NATO-led force (KFOR) in Kosovo to provide a safe and secure environment for the region's ethnic communities, created a UN Administration Mission in Kosovo (UNMIK) to foster self-governing institutions, and reserved the issue of Kosovo's final status for an unspecified date in the future. In 2001, UNMIK promulgated a constitutional framework that allowed Kosovo to establish institutions of self-government and led to Kosovo's first parliamentary election. FRY elections in September 2000 led to the ouster of Milosevic and installed Vojislav Kostunica as president. A broad coalition of democratic reformist parties known as DOS (the Democratic Opposition of Serbia) was subsequently elected to parliament in December 2000 and took control of the government. The arrest of Milosevic by DOS in 2001 allowed for his subsequent transfer to the International Criminal Tribunal for the Former Yugoslavia in The Hague to be tried for crimes against humanity. (Milosevic died at The Hague in March 2006 before the completion of his trial.)

In 2001, the country's suspension from the UN was lifted, and it was once more accepted into UN organizations. In 2003, the FRY became Serbia and Montenegro, a loose federation of the two republics with a federal level parliament. Violent rioting in Kosovo in 2004 caused the international community to open negotiations on the future status of Kosovo in January 2006. In May 2006, Montenegro invoked its right under the Constitutional Charter of Serbia and Montenegro to hold a referendum on independence from the state union. The referendum was successful, and Montenegro declared itself an independent nation on June 3 2006. Two days later, Serbia declared that it was the successor state to the union of Serbia and Montenegro. In October 2006, the Serbian parliament unanimously approved - and a referendum confirmed - a new constitution for the country. 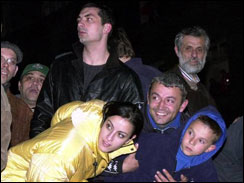 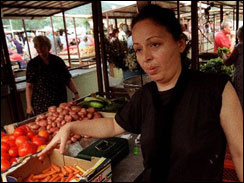 MILOSEVIC-era mismanagement of the economy, an extended period of economic sanctions, and the damage to Yugoslavia's infrastructure and industry during the NATO airstrikes in 1999 left the economy only half the size it was in 1990. After the ousting of former Federal Yugoslav President MILOSEVIC in October 2000, the Democratic Opposition of Serbia (DOS) coalition government implemented stabilization measures and embarked on a market reform program. After renewing its membership in the IMF in December 2000, a down-sized Yugoslavia continued to reintegrate into the international community by rejoining the World Bank (IBRD) and the European Bank for Reconstruction and Development (EBRD). A World Bank-European Commission sponsored Donors' Conference held in June 2001 raised $1.3 billion for economic restructuring. In November 2001, the Paris Club agreed to reschedule the country's $4.5 billion public debt and wrote off 66% of the debt. In July 2004, the London Club of private creditors forgave $1.7 billion of debt just over half the total owed. Belgrade has made only minimal progress in restructuring and privatizing its holdings in major sectors of the economy, including energy and telecommunications. It has made halting progress towards EU membership and is currently pursuing a Stabilization and Association Agreement with Brussels. Serbia is also pursuing membership in the World Trade Organization. Unemployment remains an ongoing political and economic problem. The Republic of Montenegro severed its economy from Serbia during the MILOSEVIC era; therefore, the formal separation of Serbia and Montenegro in June 2006 had little real impact on either economy. Kosovo's economy continues to transition to a market-based system and is largely dependent on the international community and the diaspora for financial and technical assistance. The euro and the Serbian dinar are both accepted currencies in Kosovo. While maintaining ultimate oversight, UNMIK continues to work with the EU and Kosovo's local provisional government to accelerate economic growth, lower unemployment, and attract foreign investment to help Kosovo integrate into regional economic structures. The complexity of Serbia and Kosovo's political and legal relationships has created uncertainty over property rights and hindered the privatization of state-owned assets in Kosovo. Most of Kosovo's population lives in rural towns outside of the largest city, Pristina. Inefficient, near-subsistence farming is common.
note: economic data for Serbia currently reflects information for the former Serbia and Montenegro, unless otherwise noted; data for Serbia alone will be added when available

Budget:
revenues: $11.45 billion
expenditures: $11.12 billion; including capital expenditures $NA
note: figures are for Serbia and Montenegro; Serbian Statistical Office indicates that for 2006 budget, Serbia will have revenues of $7.08 billion (2005 est.)

Economic aid - recipient:
$2 billion pledged in 2001 to Serbia and Montenegro (disbursements to follow over several years; aid pledged by EU and US has been placed on hold because of lack of cooperation by Serbia in handing over General Ratko MLADIC to the criminal court in The Hague)

The Kosovo War
In-depth coverage of the NATO bombing campaign to oust Serb forces from the Kosovo province.