It is the smallest nation in the Americas in both area and population.

First settled by the British in 1623, the islands became an associated state with full internal autonomy in 1967.

The island of Anguilla rebelled and was allowed to secede in 1971.

In 1998, a vote in Nevis on a referendum to separate from Saint Kitts fell short of the two-thirds majority needed.

Nevis continues in its efforts to try and separate from Saint Kitts. 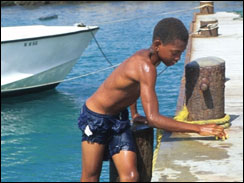 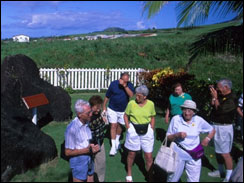 Sugar was the traditional mainstay of the Saint Kitts economy until the 1970s. The government closed the sugar industry following the 2005 harvest after decades of losses at the state-run sugar company. To compensate, the government has embarked on a program to diversify the agricultural sector and to stimulate other sectors of the economy. Activities such as tourism, export-oriented manufacturing, and offshore banking have assumed larger roles in the economy. Tourism revenues are now the chief source of the islands' foreign exchange; about 341,800 tourists visited Nevis in 2005. Additional tourist facilities, including a second cruise ship pier, hotels, and golf courses are under construction.