Saint Vincent and the Grenadines

Disputed between France and the United Kingdom for most of the 18th century, the island was ceded to the latter in 1783.

Between 1960 and 1962, Saint Vincent and the Grenadines was a separate administrative unit of the Federation of the West Indies.

Natural disasters have featured in the country's history. In 1902, La Soufrière volcano erupted, killing 2,000 people. Much farmland was damaged, and the economy deteriorated.

In April 1979, La Soufrière erupted again. Although no one was killed, thousands had to be evacuated, and there was extensive agricultural damage.

In 1980 and 1987, hurricanes compromised banana and coconut plantations; 1998 and 1999 also saw very active hurricane seasons, with Hurricane Lenny in 1999 causing extensive damage to the west coast of the island. 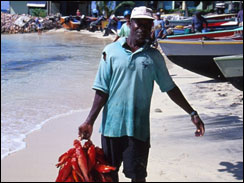 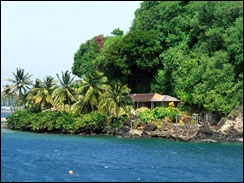 Economic growth in this lower-middle-income country hinges upon seasonal variations in the agricultural and tourism sectors. Tropical storms wiped out substantial portions of crops in 1994, 1995, and 2002, and tourism in the Eastern Caribbean suffered low arrivals in the immediate aftermath of 11 September 2001. The islands had more than 160,000 tourist arrivals in 2005, mostly to the Grenadines. Saint Vincent is home to a small offshore banking sector and has moved to adopt international regulatory standards. Saint Vincent is also a producer of marijuana and is being used as a transshipment point for illegal narcotics from South America.