(CBS)
The islands of the Turks and Caicos were first populated by Carib Amerindians but, shortly after the islands' discovery - depending on the source, on Oct. 12, 1492, by Christopher Columbus, who would have claimed them for Spain, or by Juan Ponce de León in 1512 - Spanish explorers began raiding the archipelago for slaves.

Though many nations controlled the islands, official settlement did not occur right away. For several decades around the turn of the 18th century they became popular pirate hideouts. Bermudian salt collectors were the first to settle the Turk Islands in 1678 or 1681.

In 1764-1783 they were under French occupation. After the American Revolution (1763-1783) many loyalists fled to British Caribbean colonies, including (in 1783) the first settlers on the Caicos Islands; cotton became an important crop briefly. In 1799 both island groups were annexed by Britain as part of the Bahamas.

In 1848 they were declared a separate colony under a Council President. The last incumbent was maintained in 1873 when the islands were made part of Jamaica colony; in 1794 the chief colonial official was restyled Commissioner.

On July 4, 1959 they were again a separate colony (Turks and Caicos), the last Commissioner being restyled Administrator, but until May 31, 1962, they were one of the constitutive parts of the Federation of the West Indies (see Trinidad and Tobago).

The islands were part of the UK's Jamaican colony until 1962, when they assumed the status of a separate crown colony upon Jamaica's independence.

With Bahamian independence, the islands received a separate governor in 1973.

Although independence was agreed upon for 1982, the policy was reversed and the islands remain a British overseas territory. 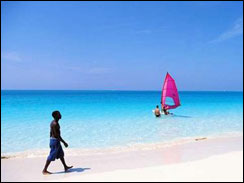 Nationality:
noun: none
adjective: none

Literacy:
definition: age 15 and over has ever attended school
total population: 98%
male: 99%
female: 98% (1970 est.)
People - note:
destination and transit point for illegal Haitian immigrants bound for the Turks and Caicos Islands, The Bahamas, and the US 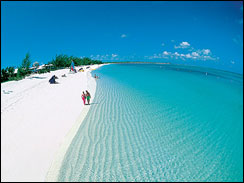 The Turks and Caicos economy is based on tourism, offshore financial services, and fishing. Most capital goods and food for domestic consumption are imported. The US is the leading source of tourists, accounting for more than three-quarters of the 175,000 visitors that arrived in 2004. Major sources of government revenue also include fees from offshore financial activities and customs receipts.

Labor force - by occupation:
note: about 33% in government and 20% in agriculture and fishing; significant numbers in tourism, financial, and other services