(CBS)
Ukraine was the center of the first eastern Slavic state, Kyivan Rus, which during the 10th and 11th centuries was the largest and most powerful state in Europe. Weakened by internecine quarrels and Mongol invasions, Kyivan Rus was incorporated into the Grand Duchy of Lithuania and eventually into the Polish-Lithuanian Commonwealth.

The cultural and religious legacy of Kyivan Rus laid the foundation for Ukrainian nationalism through subsequent centuries. A new Ukrainian state, the Cossack Hetmanate, was established during the mid-17th century after an uprising against the Poles. Despite continuous Muscovite pressure, the Hetmanate managed to remain autonomous for well over 100 years. During the latter part of the 18th century, most Ukrainian ethnographic territory was absorbed by the Russian Empire.

Following the collapse of czarist Russia in 1917, Ukraine was able to bring about a short-lived period of independence (1917-20), but was reconquered and forced to endure a brutal Soviet rule that engineered two artificial famines (1921-22 and 1932-33) in which over 8 million died. In World War II, German and Soviet armies were responsible for some 7 to 8 million more deaths. Although final independence for Ukraine was achieved in 1991 with the dissolution of the USSR, democracy remained elusive as the legacy of state control and endemic corruption stalled efforts at economic reform, privatization, and civil liberties.

A peaceful mass protest "Orange Revolution" in the closing months of 2004 forced the authorities to overturn a rigged presidential election and to allow a new internationally monitored vote that swept into power a reformist slate under Viktor Yushchenko. Subsequent internal squabbles in the Yushchenko camp allowed his rival Viktor Yanukovych to stage a comeback in parliamentary elections and become prime minister in August of 2006. 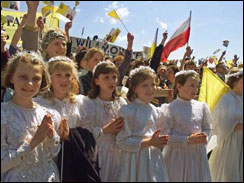 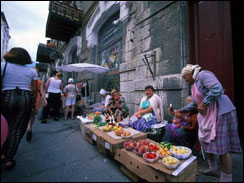 After Russia, the Ukrainian republic was far and away the most important economic component of the former Soviet Union, producing about four times the output of the next-ranking republic. Its fertile black soil generated more than one-fourth of Soviet agricultural output, and its farms provided substantial quantities of meat, milk, grain, and vegetables to other republics. Likewise, its diversified heavy industry supplied the unique equipment (for example, large diameter pipes) and raw materials to industrial and mining sites (vertical drilling apparatus) in other regions of the former USSR. Shortly after independence was ratified in December 1991, the Ukrainian Government liberalized most prices and erected a legal framework for privatization, but widespread resistance to reform within the government and the legislature soon stalled reform efforts and led to some backtracking. Output by 1999 had fallen to less than 40% of the 1991 level. Loose monetary policies pushed inflation to hyperinflationary levels in late 1993. Ukraine's dependence on Russia for energy supplies and the lack of significant structural reform have made the Ukrainian economy vulnerable to external shocks. Ukraine depends on imports to meet about three-fourths of its annual oil and natural gas requirements. A dispute with Russia over pricing in late 2005 and early 2006 led to a temporary gas cut-off; Ukraine concluded a deal with Russia in January 2006 that almost doubled the price Ukraine pays for Russian gas, and could cost the Ukrainian economy $1.4-2.2 billion. Ukrainian Government officials eliminated most tax and customs privileges in a March 2005 budget law, bringing more economic activity out of Ukraine's large shadow economy, but more improvements are needed, including fighting corruption, developing capital markets, and improving the legislative framework for businesses. Reforms in the more politically sensitive areas of structural reform and land privatization are still lagging. Outside institutions - particularly the IMF - have encouraged Ukraine to quicken the pace and scope of reforms. In its efforts to accede to the World Trade Organization (WTO), Ukraine passed more than 20 laws in 2006 to bring its trading regime into consistency with WTO standards. GDP growth was 7% in 2006, up from 2.4% in 2005 thanks to rising steel prices worldwide and growing consumption domestically. Although the economy is likely to expand in 2007, long-term growth could be threatened by the government's plans to reinstate tax, trade, and customs privileges and to maintain restrictive grain export quotas.