Christopher Columbus named the islands Santa Ursula y las Once Mil Vírgenes (shortened to Las Vírgenes), after Saint Ursula and her 11,000 virgins. They were inhabited by Arawak, Carib and Cermic Indians, all of whom died out during the colonial period from disease, harsh labor conditions, and murder.

The islands were later populated by Africans who were enslaved on sugar plantations, and on at least one indigo plantation. The sugar plantations are now gone, but the descendants of the slaves are still there, sharing a common West Indian culture with the other English-speaking islands of the Caribbean.

The islands just to the east of the island of Puerto Rico (and territorially part of it) are locally called the Spanish Virgin Islands. Although often not included on maps of the Virgin Islands archipelago, it is actually closer to St. Thomas than St. Croix is (both part of the U.S. Virgin Islands). 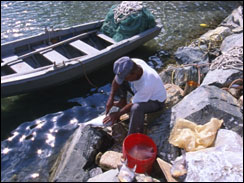 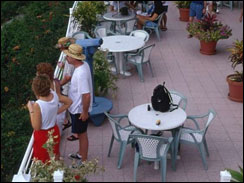 Tourism is the primary economic activity, accounting for 80% of GDP and employment. The islands hosted 2.6 million visitors in 2005. The manufacturing sector consists of petroleum refining, textiles, electronics, pharmaceuticals, and watch assembly. One of the world's largest petroleum refineries is at Saint Croix. The agricultural sector is small, with most food being imported. International business and financial services are small but growing components of the economy. The islands are vulnerable to substantial damage from storms. The government is working to improve fiscal discipline, to support construction projects in the private sector, to expand tourist facilities, to reduce crime, and to protect the environment.