(CBS)
The Siboney were the first to inhabit the islands of Antigua and Barbuda in 2400 B.C., but Arawak Indians populated the islands when Columbus landed on his second voyage in 1493.

Early settlements by the Spanish and French were succeeded by the English who formed a colony in 1667.

Slavery, established to run the sugar plantations on Antigua, was abolished in 1834.

The islands became an independent state within the British Commonwealth of Nations in 1981.

English Harbour on the southeastern coast is famed as a "hurricane hole" (protected shelter during violent storms) and is the site of a restored British colonial naval station. The latter is called "Nelson's Dockyard".

Nelson was at the time a Captain and in correspondence made it clear he would prefer not to be there, but rather facing the French. Today English Harbour and the neighbouring village of Falmouth are an internationally famous yachting and sailing destination and provisioning center.

At the end of April and beginning of May Antigua Sailing Week, an annual world-class regatta started in 1967, brings many sailing vessels and sailors to the island to race and socialize. 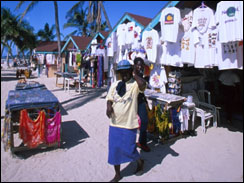 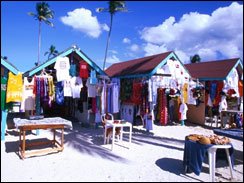