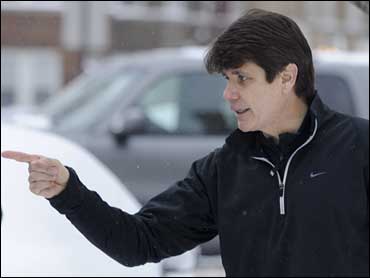 The Illinois Supreme Court on Wednesday rejected a claim that Gov. Rod Blagojevich is unfit to serve, erasing what could have been the quickest path to forcing him out of office as he faces federal charges.

Meanwhile, an attorney for the governor signaled that another path - impeachment - won't be easy. Ed Genson told the state House panel deciding whether to recommend impeachment that there's no evidence to back up claims that Blagojevich demanded kickbacks in exchange for a Senate appointment, and he dismissed the secretly recorded conversations that form the heart of the criminal case as "people jabbering."

Genson also sharply challenged the panel itself, saying some members should be removed because they've clearly already made up their minds.

Blagojevich himself said Wednesday that he wants to address the public about allegations that he sought kickbacks in choosing a successor for President-elect Barack Obama in the U.S. Senate. "I can't wait to begin to tell my side of the story," he said, but when that would happen remained unclear.

The report outlining potential contacts between his aides and Gov. Blagojevich -- including a reported 21 taped conversations with his incoming Chief of Staff Rahm Emanuel - is being held until next week at the request of federal prosecutors, Bowers reports.

The state Supreme Court rejected without comment a challenge filed by state Attorney General Lisa Madigan. She had asked the court to remove Blagojevich, arguing that his legal and political troubles are keeping him from performing his duties.

Madigan argued that the governor's problems amount to a disability, so Blagojevich should have his authority removed temporarily.

Madigan said she was disappointed with the court's decision and that the governor's refusal to resign has put the state in an "unsustainable situation." Madigan, a longtime Blagojevich foe, urged legislators to act with "deliberate speed" in impeachment proceedings.

Genson argued it would be illegal for the committee to use material from the wiretaps. He also objected to the panel's rules, saying they don't provide a clear standard for deciding whether to recommend impeachment.

Genson told the impeachment panel that some of its members have made statements suggesting they'd already made up their minds. He also said neither the law nor the constitution spell out the standard for impeachment or what evidence should be considered.

"I would suggest on behalf of Rod Blagojevich that ... those two matters be dealt with," Genson said.

The chairwoman, Rep. Barbara Flynn Currie, rejected Genson's challenges and said the committee rules "will be fair and open." The committee will recommend to the full House whether to move forward with impeachment.

Currie, D-Chicago, noted the panel has wide latitude on how to handle evidence.

"We're not a court of law. We're not quite a grand jury," Currie said. "We're not bound by specific rules of evidence."

The top Republican on the panel, Rep. Jim Durkin, said members must not be swayed by their personal feelings about the governor.

"It's important that all of us put those attitudes, those prejudices aside," Durkin said. "We should not prejudge at this moment."

Genson also is asking the Illinois House to appoint and pay for Blagojevich's attorneys in the impeachment matter. That normally would be Madigan's job, he said, but she can't do it because of her challenge to the state Supreme Court.

Genson also has asked Madigan in a letter to appoint attorneys to represent Blagojevich in his legal matters. It's unclear whether Genson wants the state to pay for the criminal defense.

Madigan's office said it will respond soon to Genson's request.

Blagojevich emerged from his Chicago home Wednesday morning for a jog and said he's ready to discuss his case.

"I can't wait to begin to tell my side of the story and to address you guys and, most importantly, the people of Illinois. That's who I'm dying to talk to," he said. "There's a time and place for everything. That day will soon be here and you might know more about that today, maybe no later than tomorrow."

Blagojevich said he was "in good hands" with Genson appearing at the Capitol without him. Asked about when he might talk, the governor was glib: "Hang loose. To quote Elvis, `hang loose."'

The Illinois Senate adjourned Tuesday without considering a plan to fill Mr. Obama's vacant Senate seat through a special election. Republicans accused the Democratic majority of trying to hold onto the seat by denying the public a right to vote.

Blagojevich was arrested by FBI agents last week on charges that include scheming to appoint Obama's replacement based on who offered the governor the best political or financial deal.

Currie has said she's waiting for U.S. Attorney Patrick Fitzgerald to indicate whether the panel will be allowed to hear testimony from certain witnesses without compromising the federal corruption case against Blagojevich. She said she has no idea when Fitzgerald will reply.

Criminal charges aside, the committee will weigh other allegations against Blagojevich. Lawmakers have long accused the Chicago Democrat of abusing his power by spending money without legislative approval, defying legislative orders and denying lawmakers information they should receive.