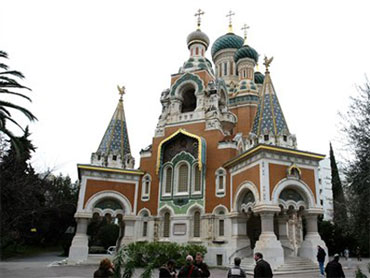 A French court ruled Wednesday that a Russian Orthodox cathedral built on the French Riviera nearly a century ago under Czar Nicholas II now belongs to Moscow.

The ruling by the Nice court is the latest development in Russia's bid to obtain ownership of Orthodox edifices around the world; Italy last year amicably returned to Russia a church in the southern city of Bari.

Wednesday's ruling was a defeat for an association founded by Russians who fled the Bolshevik Revolution that has been fighting to maintain its control over the Saint Nicholas Cathedral in Nice, and its archbishop is accusing the Russian government of a land grab as part of a national pride campaign.

Father Jean Gueit, the cathedral's archpriest, said the ornate cathedral has become a "political tool" - and he vowed to appeal the court decision.

But Russian Orthodox Church spokesman Archpriest Nikolai Balashov said, "We see the ruling of the Nice court as the restoration of historical justice," according to RIA Novosti news agency.

Russia said the only change it plans is to stop charging an admission fee to people visiting the building.

The cathedral, with its two pointed spires and five crucifix-topped onion-shaped domes, was built under Nicholas II in 1912 - nearly 50 years after his grandfather, Alexander II, bought the land it sits on. The cathedral was designed to serve Russian holiday-makers and a growing Russian expatriate community.

The association's 99-year lease on the cathedral and its land expired in 2007. The group had argued a statute of limitations had run out - thereby preventing any Russia state claim to the site.

The association argued in court that Alexander II made a personal purchase of the land. Russia countered that it was imperial and thus state property.

"Why does the Russian state want this?" said Gueit, whose grandfather, he says, served as a colonel in Russia's Imperial Army. "It is well known they are simply engaged in a policy of domination and reaffirmation of Russian identity."

Russia says the faithful in Nice have little to fear.

"Our ambassador has said many times that nothing is going to change at this church - aside from abolishing the entrance fee," said Russian Embassy spokesman Andrei Klimenev. "It's not normal that people are forced to pay to communicate with God."

Moscow considers the Nice cathedral, the church in Bari and another Orthodox church in Jerusalem among the important symbols of Russia's global presence and influence.

Russia has been on a steady march to retrieve holdings in the Russian Orthodox Diaspora.

Other religious sites, such as the Alexander Nevski church of 1884 in Copenhagen, always remained Russian. It was built on a request by Czarina Maria Feodorovna, the Danish-born mother of Nicholas II.

The French Riviera is steeped in Russian history. Russian aristocrats began flocking there in the 19th century, and other emigres came after the 1917 Revolution. More than 5,000 Russians were estimated to live in the region in the 1930s, including Nobel Prize-winning author Ivan Bunin.

After the 1991 Soviet collapse, the Riviera quickly became popular with Russia's nouveau riche who bought some of the most expensive villas there and held lavish parties.