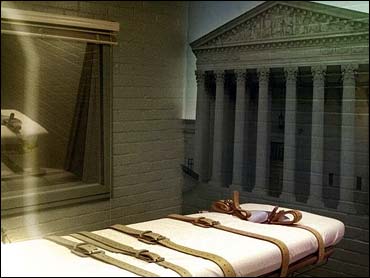 The Supreme Court agreed Friday to decide whether a state can execute someone convicted of raping a child, one of the few remaining crimes that does not require the death of the victim to result in capital punishment.

Patrick Kennedy, 43, was sentenced to death for the rape of his 8-year-old stepdaughter in Louisiana. He is the only person on death row in the United States for a rape that was not also accompanied by a killing.

The Supreme Court banned executions for rape in 1977 in a case in which the victim was an adult woman.

The justices will hear arguments in the case in April.

The last executions for rape or any other crime that did not also include the victims' death were in 1964.

Forty-five states already ban the death penalty for any kind of rape and among the other five states that in theory allow it for child rapists. Kennedy's case is the only time a state has sought to execute someone. Montana, Oklahoma, South Carolina and Texas allow executions in such cases.

The Louisiana Supreme Court upheld the sentence. "Our state legislature and this court have determined this category of aggravated rapist to be among those deserving of the death penalty, and short of first-degree murder, we can think of no other non-homicide crime more deserving," Justice Jeffrey Victory wrote.

Chief Justice Pascal Calogero dissented, saying that with the possible exception of espionage or treason, "the Eighth Amendment precludes capital punishment for any offense that does not involve the death of the victim."

The child rape case is the second capital punishment case from Louisiana this term at the Supreme Court. The justices already are considering whether a prosecutor improperly excluded blacks from a jury and then inflamed the all-white panel with references to the O.J. Simpson case.

In addition, the court is weighing whether the way Kentucky executes prisoners by lethal injection - procedures similar to those used in three dozen states - violates the Constitution.

Kennedy was convicted in 2003 of raping his stepdaughter at their home in suburban New Orleans. The girl initially told police she was sorting Girl Scout cookies in the garage when she was assaulted by two boys.

Police arrested Kennedy a couple of weeks after the March 1998 rape, but more than 20 months passed before the girl identified him as her attacker.

His defense attorney at the time argued that blood testing was inconclusive and that the victim was pressured to change her story.

Kennedy's Supreme Court lawyers also called pointed out that Kennedy is black and that nearly 90 percent of people executed for rape in the United States were black. "This court should pause before condoning a practice so heavily tinged with the scourge of racism," Stanford University law professor Jeffrey Fisher, Kennedy's lead lawyer, said.

The state said the court should turn down the case because Louisiana law is narrowly tailored to apply only to people convicted of raping children younger than 12.