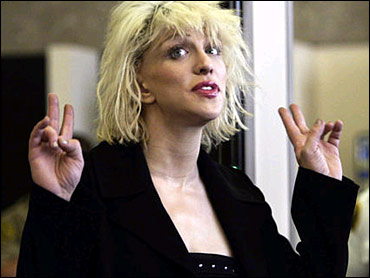 "I'm on tour," the singer protested. But her lawyer conferred with her and said she would be there.

Before the judge took the bench, Love smiled at reporters and pointed to her bare shoulders.

"Strapless," she said, referring to her black dress. "It's a silly case. Silly dress."

Beverly Hills police Officer Douglas Trerise testified that he and two other officers went to Love's home early Oct. 2, 2003, after she called police. He said Love handed the baggie of pills to one of the officers.

Earlier that night, Love was arrested by Los Angeles police for investigation of disorderly conduct and being under the influence of a controlled substance. The misdemeanor case is being tried separately.

Prosecutor Jeffrey Stodel said outside court that Love is eligible for a drug-diversion program. The maximum possible sentence for the felonies is more than three and a half years in prison.

Love's lawyer, Michael Rosenstein, told reporters his client had prescriptions for the drugs. "The district attorney is turning this into a circus and a witch hunt," he said.

Stodel said, "We're treating Ms. Love the same way we would treat anyone else who had illegal substances."