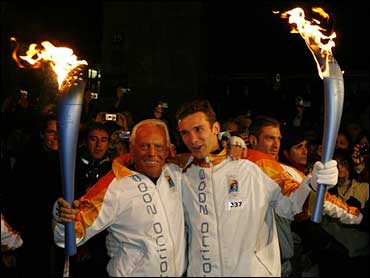 The Phoenix Coyotes haven't been in position very often to find out whether success breeds success. Now they are, and they agree that it does.

Rick Tocchet scored on a slap shot high in the slot with 52 seconds left in overtime to give the surging Coyotes a 3-2 win over the Edmonton Oilers on Saturday night. Tocchet's heroics were possible because the Coyotes forged a tie in regulation on Brad Isbister's goal with 3:20 left.

"We're riding a wave," Tocchet said. "It's like playing craps and rolling sevens."

The victory, Phoenix's NHL-high fifth in a row and second consecutive in overtime, moved the Coyotes a half-game ahead of Dallas for first place in the Pacific Division. The Coyotes are on a league-high 11-game unbeaten streak (9-0-2).

Nikolai Khabibulin stopped only 13 of 15 Edmonton shots, but it was enough to also keep alive his team's post-expansion league record of holding teams to two goals or less -- now at 14 in a row.

With the score 2-2, Tocchet scored his seventh goal after taking a pass from Yuha Ylonen in the Oilers' zone.

The Oilers' Todd Marchant scored on a slap shot from the circle with 6:34 to play in regulation, and it appeared Edmonton would end Phoenix's great run. Then Brad Isbister tied it.

"They came out hard in the third period, and we weathered the storm and scored a goal. Then they scored on the next shift, and that kind of put us on our heels," Marchant said.

In the second period, Greg Adams gave Phoenix a 1-0 lead, and Roman Hamrlik tied it for the Oilers.

The Coyotes were hampered by their punchless power ply. They ranked 24th in the NHL before the game, and didn't help the percentage by failing to score in seven advantages. But their league-best penalty-killing unit also held Edmonton scoreless in five power plays.

Edmonton goalie Mikhail Shtalenkov madE 36 saves, but was overwhelmed by the Coyotes' firepower late in the game.

"They had some great goaltending," said Adams, who scored 14 goals in 49 games for Dallas last season but had yet to find the net for the Coyotes. "I think it really showed the character of this team. They kept coming and coming, and we didn't give up all game."

Edmonton coach Ron Low said his team didn't produce enough offense to justify a claim that it blew the victory.

"We were actually fortunate to get to overtime," Low said. "We ended up where we should have. We were outplayed."

Isbister took a pass from Keith Carney out of the neutral zone and skated in on Shtalenkov, who came out past the crease to challenge him.

Isbister, who didn't record his first goal of the season until Wednesday, got the second when he faked left, causing Shtalenkov to fall, and went right for a close-range shot into an open net with 3:20 left in the game.

"Whether we're up a goal or down a goal, we're confident we can win the game," Isbister said.

Marchant earlier scored on a slap shot from the circle.

Early on, the Coyotes struggled. Gerald Diduck had a goal disallowed 8:17 into the game, and Phoenix failed to score on four power plays in the first period, even though it had a 5-on-3 advantage for 48 seconds midway through the period.