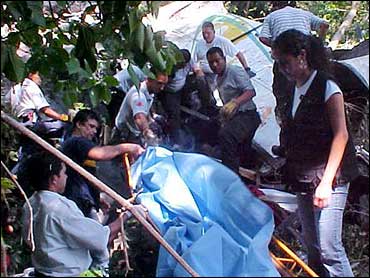 A bus carrying tourists including passengers of a flight from Phoenix crashed in western Mexico on Saturday, killing at least 17 and injuring 13 according to bus company and government officials.

The Vallarta Plus bus was carrying 35 passengers from the resort city of Puerto Vallarta to Guadalajara before dawn when it ran off a mountain road and plunged down a 250-meter ravine, the Nayarit state prosecutor's office said in a news release.

The office reported 17 dead: 13 men, three women and a 1-year-old child. The bus' driver, identified as 28-year-old Madiel Coronado, was among the injured.

But state Red Cross spokesman Miguel Langarica said at least 18 people were killed and 13 injured - five gravely. The discrepancy could not immediately be reconciled.

Vallarta Plus spokesman Daniel Rios said as many as half of the passengers were from a flight that had left Phoenix on Friday for Guadalajara. The plane had been rerouted to Puerto Vallarta along with 17 other flights because of a fire at the Guadalajara airport.

Rios said at least one family of eight were Mexicans legally living in Phoenix who were in the country for Independence Day celebrations. Four of them were injured and one, the 1-year-old child, was killed.

Authorities said four of the injured were from Los Angeles and nearby Riverside, California, but did not give hometowns for the dead.

The crash occurred near the town of Compostela, about 120 miles from Guadalajara.

Mexican newspaper Reforma said the Guadalajara airport was shut down after a flight from Cancun caught fire. It was unclear whether there were any injuries from the fire, and no one answered phone calls placed to the airport late Saturday.