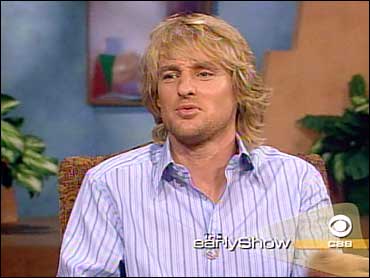 The biggest comedy of 2005 is the first big video release of 2006. The Early show entertainment contributor Jess Cagle, who also is a senior editor at People magazine, reports in the "Home Theater" segment.

When Owen Wilson teamed up with Vince Vaughn, their fans had very high expectations, but "Wedding Crashers" surpassed everyone's wildest dreams. "Wedding Crashers" took in close to $210 million at the box office. However, it may have given rise to a new wave of tuxedo-wearing imposters.

In "Wedding Crashers," Vaughn and Wilson play womanizing best friends who have a rather unique springtime hobby. They drop in on weddings uninvited, hoping to score with emotionally vulnerable women.

"I never heard of anyone crashing a wedding, but the producer of the movie who developed it, he said that when he was younger, he did crash weddings," says Vaughn.

What saves the characters from being vile, Vaughn hypothesizes, is the fact that "they really love weddings, they love dancing, they love eating, they love the band, they love singing, so they become a little more innocent than they would be if they were just interested in meeting girls."

Says co-star Wilson, "It was fun playing these guys who are trying to get girls, and then my character begins to wonder if it's getting a little bit sleazy, and a little bit, we're in our mid-30s, and Vince assures me that it isn't, and he gets me to crash one last wedding and that's where I meet Rachel McAdams, who I fall for."

Of McAdams, Wilson says, "Aside being a really great actress, she's really easy on the eyes, kind of like a 1950s kind of movie star, so kind of open, great face."

The film also co-stars Jane Seymour as the mother of the bride. She tries to seduce Wilson's character

"I may come across very self-assured, but I was really nervous," Wilson says. "It's kind of a Mrs. Robinson scene where she wants me to feel her breasts. I was nervous. Even though it's this beautiful lady, it's hard to get past that."

But, really, the film is a comedic showcase for Vaughn and Wilson, who says, "What made it kind of nice was that even though we did have different styles, we have the similar sensibility. We kind of found the same things funny and stuff, 'cause we did a lot of work on the script and on the parts."

Vaughn and Wilson say they had such a good time making the film, they will most likely team up for another movie, although probably not a "Wedding Crashers" sequel.