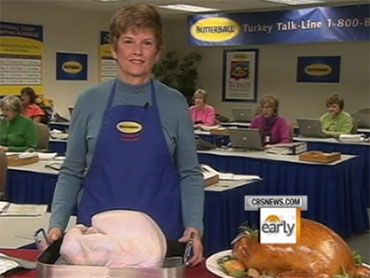 The famous Butterball Turkey Talk-Line is celebrating its 30th year.

Mary Clingman is the talk-line's director, and she and more than 50 other turkey experts are at the ready at 1-800 BUTTERBALL to help cooks of every generation prepare Thanksgiving dinners by answering their questions.

The phone lines opened Nov 1 and are open on Thanksgiving; every worker has to be able to work on that day.

Every employee goes through "Butterball University" before taking to the phones.

What's the weirdest question you've gotten in all your years at the talk line?

A lady from Denver who had the turkey in a snow bank-that's where she stored it and it snowed the night before and she couldn't find it. I said next year put a flag out there to help you.

Clingman also remembers a flustered father who called a few hours after his wife had given birth to their first child. He was concerned that their Thanksgiving turkey had been thawing in the fridge for too long while he was at the hospital. When Clingman asked the man how much it weighed, he replied, "The turkey or the baby?" After determining the turkey's weight and thawing time, Clingman assured the man he'd be able to deliver a safe and delicious belated Thanksgiving dinner when Mom and the newborn came home.

The most common question?

Every year, it has something to do with thawing. When the line starts up, most people start asking about old turkeys from a year ago, and then they want to know if they can still be used. They start thinking about planning in early November. It's a big meal to pull off. The second most common type of question is food safety.

Craziest place she ever had a call from?

We have calls from every state in the country, but Air Force bases are the most unusual. We also get calls from Hawaii and Puerto Rico.

Do workers have to be experienced in turkey talk?

We have 52 ladies this year, and true everyone has a bachelor's degree in some food science. A lot of the women have Masters. A lot of them have other jobs, but they love this job and tweak their calendars to make sure they're able to be here. One of them, who's been here 28 years, gets the two weeks off from her real job to be here.

We have a program called Butterball University. On October 1, which is "Freshman Day," we have a turkey lineup with 10-12 turkeys. They are cooked with different methods and put out, and everyone can see each method. It's a hands-on approach.

They ask about leftovers, mostly. Some families have the holiday before or after the actual day because the family cannot meet for whatever reason.

I think people don't know when the turkey is done. It's very hard to look and see when it's done. People overcook it and give it an extra half-hour. My biggest tip is to use a meat thermometer to make sure it's accurate. I would test that out before Thanksgiving. When the turkey is at 150-160 degrees. it's almost done. Our preferred method is a shallow open pan.

Have you ever messed up a bird or had any Thanksgiving mishaps?

I think everybody here has had a mishap. We can tell you how to fix anything here.

Do you ever get sick of turkey?

We aren't eating it, so, no! We aren't around it as much!

Do you work on Thanksgiving?

It's part of the deal -- we have to work Thanksgiving Day. It's an eight-hour shift. My husband does the cooking, and has every holiday for the past 25 years. I get off around 3 p.m. and we have dinner. The staff gets one free turkey and takes home a turkey during Butterball University.