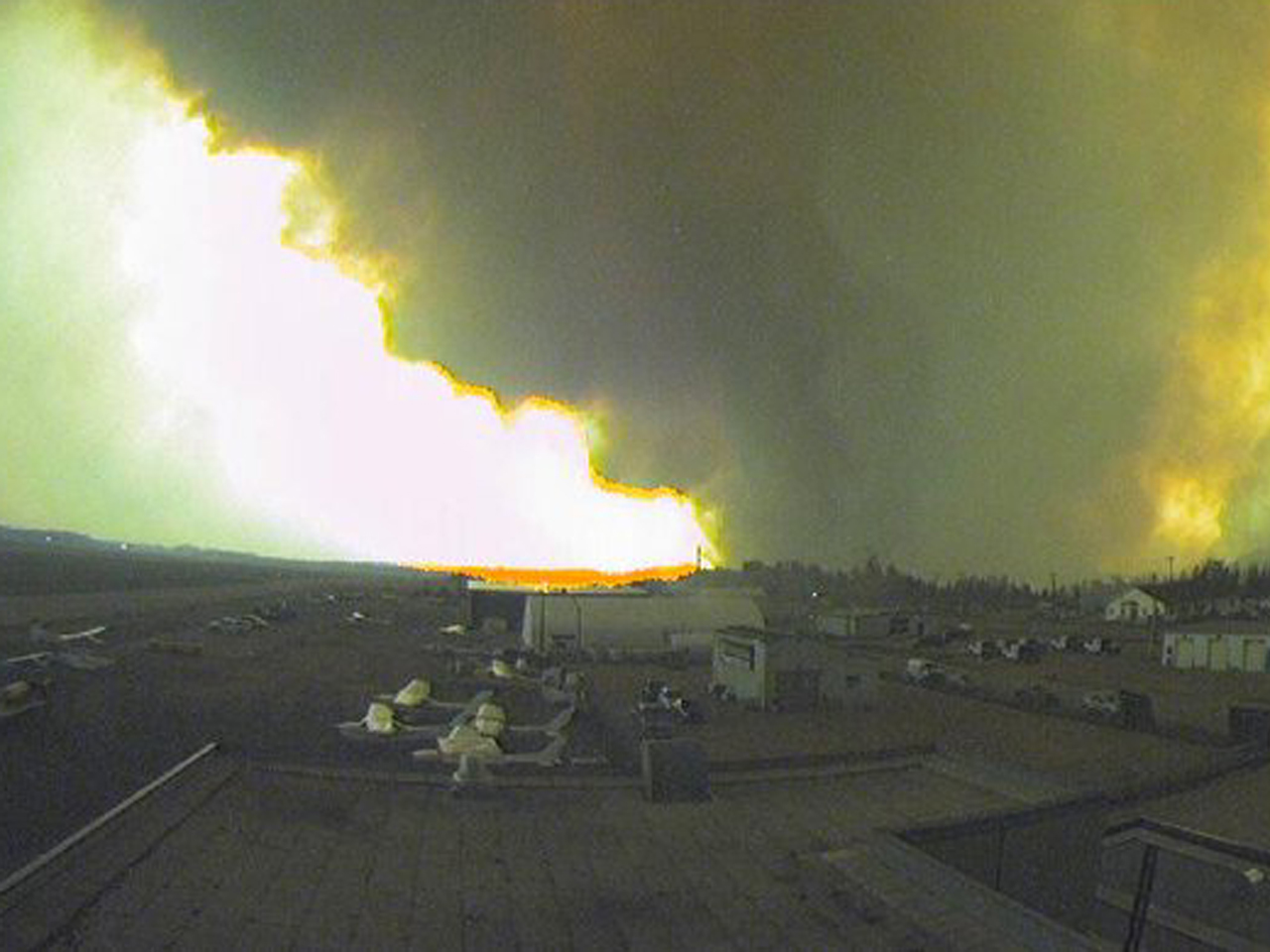 FORT MCMURRAY, Alberta -- A massive wildfire raging in the Canadian province of Alberta grew to 210,035 acres and officials said Thursday they would like to move south about 25,000 evacuees who had previously fled north, including 8,000 by air.

More than 80,000 people have emptied Fort McMurray in the heart of Canada's oil sands, authorities said.

The Alberta government said more than 1,100 firefighters, 145 helicopters, 138 pieces of heavy equipment and 22 air tankers were fighting a total of 49 wildfires, with seven considered out of control.

Chad Morrison with AB Wildfire, manager of wildfire prevention, said the blaze grew rapidly, fueled by gusting winds, and he expected the fire to continue to grow Thursday because of dry conditions but it will be away from the community.

"Let me be clear: air tankers are not going to stop this fire," Morrison said. "This fire is an extreme fire event."

The fire has torched 1,600 homes and other buildings in Fort McMurray. There have been no injuries or death from the fires. The province of Alberta declared a state of emergency.

"Homes have been destroyed. Neighborhoods have gone up in flames. The footage we've seen of cars racing down highways while fire races on all sides is nothing short of terrifying," Prime Minister Justin Trudeau said in Parliament on Thursday, calling it "the largest fire evacuation in Alberta's history."

Trudeau called on all Canadians "to support our friends and neighbors at this difficult time," saying the federal government will match individual charitable donations to the Red Cross. Opposition Conservative Rona Ambrose's voice cracked as she noted that Fort McMurray is destination for thousands of Canadian workers and that it was a tough time for Albertans.

Alberta Premier Rachel Notley said so much is dependent on the weather and rain is needed. She said she didn't know how much better the evacuation could have been when asked if ample warning was given to residents, noting that in 48 hours more than 80,000 people were evacuated from a town that essentially has two roads out of it.

Fort McMurray is surrounded by wilderness and is Canada's main oil sands town. Despite the size of the town and its importance to the Canadian economy, there are essentially only two ways out via car. The region has the third largest reserves of oil in the world behind Saudi Arabia and Venezuela.

Aided by high winds, scorching heat and low humidity, the fire grew from 29 square miles Tuesday to 38.6 square miles on Wednesday, but by Thursday it was almost nine times that -- at 328.2 square miles.

The fire remained wrapped around the west and southern edges of the city.

"It's something like you'd see outta the movies," Eric Lavallee told CBS News correspondent Ben Tracy. "The bank was on fire when we were driving. The trailer park that was there is gone. The Super 8's gone. One of the gas stations is gone."

About 25,000 evacuees moved north in the hours after Tuesday's evacuation, where oil sands work camps were being pressed into service to house people. But the bulk of the more than 80,000 evacuees fled south to Edmonton and elsewhere, and officials said they eventually would like to move everyone south where they have better support for the displaced.

Officials are now trying to fly 8,000 evacuees out of the area starting Thursday afternoon and are hoping the highway becomes safe enough to move people that way.

"Our focus right now is on getting those people south as quickly as possible," Notley said.

Government officials said energy companies in the area were prepared to use their planes in an airlift and a military aircraft was on standby.

Unseasonably hot temperatures combined with dry conditions have transformed the boreal forest in much of Alberta into a tinder box. Morrison said they are investigating the cause of the fire but he said it started in a remote forested area and said it could have been lightning.

A combination of factors conspired to make this wildfire especially ferocious, said Bill Patzert, a climatologist at NASA's Jet Propulsion Laboratory in California. The El Nino global weather system brought Alberta a mild winter and low snowpack, he said. Patzert said the flames sparked at a time between the snowy season and before springtime rains that turn the landscape green, making the region especially vulnerable to wildfire.

The flames are moving so fast that they are nearly impossible to fight, he said.

"In a way, it's a perfect storm," Patzert said. "It's been warm, it's been dry and windy. It's the in-between period before you're in the full bloom of spring."

With few exceptions in the United States, an entire town hasn't been threatened on this scale for over 100 years, Stewart said, noting rather that devastation has struck neighborhoods and smaller communities in California.

There is no stopping the advance of a fire such as the wind-driven flames in Alberta, which is spreading embers well beyond fire lines, Stewart said. He noted that the aggressive fire is also unusual for burning so early in the warm season and so far north.

"You could add five times the number of firefighters, but you can't get all the embers," he said. "There's no way to put out every ember flying over firefighters' heads."

Officials said the emergency operations center relocated back to Fort McMurray on Thursday after moving to Lac La Biche, Alberta -- about 175 miles 280 kilometers to the south following an evacuation.

"It's very stressful," said Donna Guillamot, who was among those evacuated from the evacuation center overnight. "You don't know what's burned and what's not burned. When you can go back and then you're sitting here and all you can see is red flames -- it's pretty scary."

The fire has dealt a blow to the region's crude production, with companies curtailing production or stopping it altogether. Notley said the infrastructure for oil and gas production remains largely unaffected. What's slowing down production is that their employees are not there, she said.

"As things stand now the industry will be well positioned to ramp back up once the fire is under control," Notley said. "It will depend on how long it takes for people to be able to return to work in and around Fort McMurray."

The airport only suffered minor damage because of the "herculean'" efforts of firefighters, said Scott Long of the Alberta Emergency Management Agency. Firefighters have focused on protecting key infrastructure like the water treatment plant, the hospital and the airport.

Morrison said four air tankers from Quebec will arrive Thursday and 100 firefighters are arriving from Ontario.