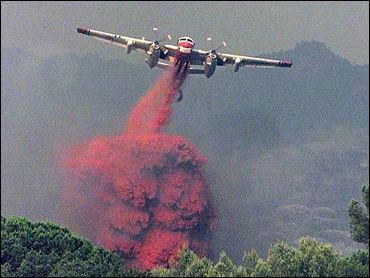 Firefighters rushed water to parched forests across the foothills of the French Riviera on Wednesday as winds threatened to stoke fires that have killed four foreign tourists and forced thousands to evacuate.

"It's a tough battle," said Marc Petit, a spokesman for the resort-rich Var region, where two days of forest fires that French officials blame on arsonists have left a trail of scorched earth.

The blazes, said to be the worst in a generation, broke out Monday in the picturesque Var region, an area between Toulon and Nice that is thick with Mediterranean pine trees and popular with tourists.

At least two dozen individual fires — aided by the fierce Mistral wind that blows across the Mediterranean — had charred more than 21,000 acres, destroying or damaging about 60 homes.

Four people were killed: a 15-year-old British girl and her grandmother died in Plan de La Tour; a Polish man was killed in Vidauban; and a Dutch woman died of injuries sustained in the seaside resort of Sainte-Maxime.

Local newspapers published pictures of a vacation home of Hollywood star Johnny Depp and French rock star Vanessa Paradis in Plan de la Tour. The house and garden, an island of green in a sea of blackened trees, were reportedly spared because of good watering.

Others were not so lucky. Some 20,000 residents fled their homes, and vacationers at campsites near Sainte-Maxime and Frejus were told to leave.

"It's very frightening, especially when you have a car full of children," British tourist Mandy Matthews, who fled the flames with her four children, told Associated Press Television News. "We could feel the flames ... It hasn't been the best holiday so far."

Firefighters controlled the largest of the fires, near the western portion of the French Riviera, but at least one re-erupted Tuesday east of Draguignan, about 28 miles from the fashionable resort of Cannes, fire officials said.

Some 700 firefighters equipped with 150 fire trucks and four water-spraying planes were deployed Wednesday across the region to fight the fire. Two Russian helicopters with large water reservoirs were on their way, as were dozens of Italian firefighters.

"The weather forecast is for winds later today — we're fearful of that," Petit said. "We're doing all we can to drench the forests to keep the fires from spreading."

Officials were hoping for rain to help douse the region that has not had so much as a drizzle over the last two and half months, part of a dry spell stretching as far as northeast Italy.

Police in Draguignan detained a 30-year-old city municipal employee from the nearby village of Figanieres for questioning.