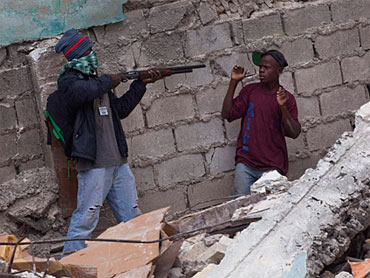 "If you don't kill the criminals, they will all come back," a Haitian police officer shouts over a loudspeaker in the country's most notorious slum, imploring citizens to take justice into their own hands.

The call for vigilantes comes as influential gang leaders who escaped from a heavily damaged prison during the country's killer earthquake are taking advantage of a void left by police and peacekeepers focused on disaster relief.

In the sprawling Cite Soleil slum, gangsters are settling into the haunts they dominated before being locked up and resuming struggles for control that never really ended once they were inside the walls of the city's notorious main penitentiary.

"The trouble is starting," said Jean-Semaine Delice, a 51-year-old father from Cite Soleil. "People are starting to leave their homes to go to others."

As police urged residents to fight criminals themselves, Delice said, "I think it's a message we should listen to."

There is the potential for violence in any disaster zone where food and medical aid are unable to keep up with fast-growing hunger and mass casualties. But the danger is multiplied in Haiti, where self-designated rebels and freedom fighters — or simply neighborhood toughs — have consistently threatened the country's fragile stability with a few weapons, some spare money for handouts and the ire of disaffected throngs.

"Even as we are digging bodies out of buildings, they are trying to attack our officers," Cite Soleil police inspector Aristide Rosemond said, surrounded by officers wielding automatic weapons.

Thousands of Haiti quake victims are struggling to board buses to flee hunger and violence in the shattered capital, hoping that food will be easier to find in the countryside.

"Early Show" co-anchor Harry Smith reports from downtown Port-au-Prince that some people are still heading in to the capital city - but only in small numbers and primarily to loot any merchandise they can get their hands on and then leave again.

People who live here have been told not to count on security forces for help.

The Brazilian peacekeeping unit assigned to Cite Soleil lost 18 of its 145 soldiers in the earthquake. Ten perished when the "Blue House" — a landmark concrete tower converted into a U.N. post near the slum's entrance — collapsed, leaving weapons and equipment readily available to fast-acting looters.

The police lost an uncounted number of personnel and equipment, leaving a group of officers who in large part are just recently recruited and trained.

"The problem is they have weapons ... so we cannot send the population or (just) any policemen" to capture them, Prime Minister Jean-Max Bellerive told The Associated Press on Monday.

Bob Perito, coordinator of Haiti programs for the Washington-based U.S. Institute of Peace think tank, said concerns about the gangs are legitimate — in the long run.

In the more immediate future, "the gangs may be more of a nuisance," Perito said in an interview from his Washington office.

"They are not going to challenge the U.S. military," he said. "But when the U.S. decides the emergency is over and goes home, will the reconstituted U.N. peacekeeping force have the coherence necessary to suppress the problem?"

Security has always been precarious in Cite Soleil, although it is far calmer then the days when it became a war zone, during the 2004 ouster of President Jean-Bertrand Aristide.

On Monday, Brazilian peacekeepers drove from one food-distribution point to another as women, children and older men jockeyed to fill their buckets from a spouting broken water main. The gang members stayed out of sight.

The scene was drastically different Sunday, when a man robbed a motorcyclist's bag of rice with a .38-caliber pistol in broad daylight and residents swapped stories of gangs equipped with heavy automatic weapons coming out of hiding even as U.S. military cargo planes rumbled overhead.

Bellerive said he has met with U.N. peacekeepers, police and the newly arrived U.S. Army to discuss ways of combating the escaped convicts. Tactics thus far have included distributing photos and tracking the gangsters, which has led to some arrests.

But it is not a top priority, even though officials estimate as many as 4,000 prisoners escaped from the main prison.

"We are not worried about one or two guys," Brazilian battalion spokesman Col. Alan Sampaio Santos said. "Later on we can go after them."

Until then, much of the neighborhood's security will be in the hands of local populations, who are forming night brigades and machete-armed mobs to fight bandits across the capital.