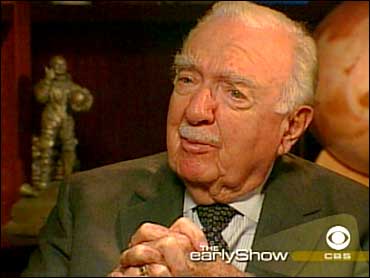 Most people old enough to remember the third week of November in 1963 can recall the exact moment they heard that President John F. Kennedy had been assassinated. And for millions, the word came from CBS news anchor Walter Cronkite.

Forty years later, Cronkite, now retired, says his memories of the day, and the man, are still vivid.

On Nov. 22, 1963, it was possibly the last thing viewers expected to see in the middle of an afternoon soap opera.

"As The World Turns" was interrupted by a CBS special bulletin. The anchor, Walter Cronkite, said: "Here is a bulletin from CBS News. In Dallas, Texas, three shots were fired at President Kennedy's motorcade in downtown Dallas. The first reports say that President Kennedy has been seriously wounded by this shooting."

On that most frantic of days, the voice delivering the horrifying news was calm, measured. CBS newsman Walter Cronkite's composure wavered only once: at the moment when the unthinkable was confirmed.

Cronkite tells The Early Show, "My gosh, the president's dead. John Kennedy, this young president, is cut down, is dead. And it hit me pretty hard, just for that moment, while I gathered myself together, and went on again, beginning to think about, now where do we go?"

This is the how most Americans remember John F. Kennedy: his youthful vitality immortalized in flickering black and white.

But behind the style, and the smile, the reality of his life was often at odds with the carefully crafted public image.

He looked strong, even athletic, but he was fragile and in poor health. He was enormously popular, but not always where it counted.

In fact, some of Kennedy's most important domestic legislation was passed after his death.

For all of John F Kennedy's public wit and magnetism, he could be tough to deal with, face to face.

Cronkite's assessment of Kennedy as a man, as he saw him running for president and then also in office was "surprisingly enough, terribly self-centered. To a point of a certain kind of egotism."

Cronkite tells The Early Show co-anchor Harry Smith, "He was a charming man when he wanted to be charming. He could be quite difficult when he chose not to be charming and had something else on his mind. He could be insistent upon his way, when his way was apparent to many others as the wrong way."

He went the wrong way when he authorized the secret invasion of Cuba at the Bay of Pigs. It was a rout, and a very public defeat.

On TV he admitted, "We intend to accept full responsibility for our errors, and we expect you to point them out when we miss them."

But Kennedy's unwillingness to shrink from a fight sometimes carried the day. He joined the battle for civil rights; willed the country into a costly, and successful, race for the moon; and forced Russia to back away from putting missiles in Cuba.

Cronkite says, "Certainly, he lived up to courage in office when he faced down the Russians on the missile crisis. That was a very important point, and reaffirmed people's confidence in him at a time when he hadn't done much up to that time. So, there was even greater feeling that we were in good hands with Kennedy."

And so, in that November of 1963, the nation's youngest elected president went to Texas with his incandescent first lady at his side. A year away from election '64, John F. Kennedy had yet to accomplish the major goals of his first term. But, in the happy chaos of the airport that day, it seemed as if there would be time for that.

On Friday, The Early Show's coverage of the JFK assassination anniversary continues live from Dealey Plaza in Dallas.