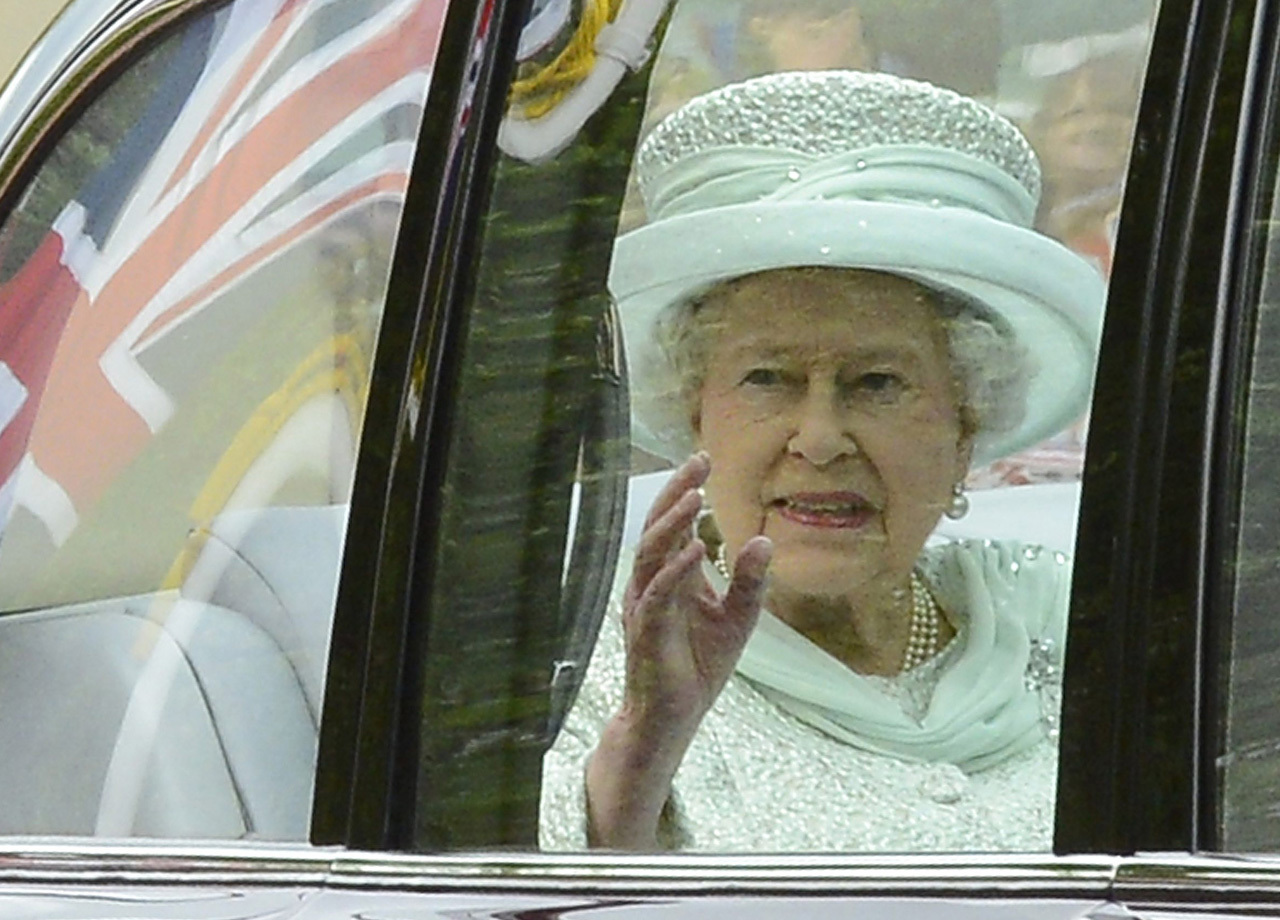 (CBS/AP) LONDON - Crowds cheering "God save the queen!" and pealing church bells greeted Queen Elizabeth II on Tuesday as she arrived for a service at St. Paul's Cathedral, on the last of four days of celebrations of her 60 years on the throne.

Poignantly, the queen was without Prince Philip, her husband of 64 years, who was hospitalized on Monday for treatment of a bladder infection.

The queen was accompanied by Prince Charles and his wife Camilla, Prince William and his wife Kate, and Prince Harry.

During the service, the Archbishop of Canterbury, Rowan Williams, praised the queen for bringing happiness to the nation. His thoughts were seconded by jubilant crowds that cheered royals major and minor as they made their way to the service of thanksgiving.

"We are marking six decades of living proof that public service is possible and that it is a place where happiness can be found," Williams told the royals and dignitaries filling the vast landmark church designed by Christopher Wren in the 17th century.

"This year has already seen a variety of Jubilee creations and projects. But its most lasting memorial would be the rebirth of an energetic, generous spirit of dedication to the common good and the public service, the rebirth of a recognition that we live less than human lives if we think just of our own individual good," Williams added.

After the service, the queen went to a reception with some 250 guests," reports CBS News correspondent Charlie D'Agata.

The queen will close the Diamond Jubilee celebrations with a rare address to the nation.

The broadcast at 1700 GMT (1 p.m. EDT) in Britain and throughout the Commonwealth follows the service, a lunch in a medieval hall and a carriage procession back to Buckingham Palace where the queen and her family could greet well-wishers from a balcony.

The two-minute address, recorded on Monday, will also be available on the Royal Channel on YouTube, the palace said. Other than the annual Christmas Day broadcasts, the 86-year-old monarch has rarely spoken directly to the nation.

Williams paid tribute to the queen for her service to the nation and Commonwealth. It was not a role she chose, but one thrust upon her when her uncle David, King Edward VIII, abdicated in 1936. The queen's father became king and Elizabeth, the elder daughter, was destined to reign.

Within the constraints of a constitutional monarchy, the queen's life has been one of ceremonial duty, world travel and the pleasures of great wealth. She has also been the mother of family that has produced turbulent marriages and traumatic divorces.

"Dedication to the service of a community certainly involves that biblical sense of an absolute purge of selfish goals, but it is also the opening of a door into shared riches," Williams said.

"I don't think it's at all fanciful to say that, in all her public engagements, our queen has shown a quality of joy in the happiness of others; she has responded with just the generosity St. Paul speaks of in showing honor to countless local communities and individuals of every background and class and race," Williams said.

"She has made her public happy and all the signs are that she is herself happy, fulfilled and at home in these encounters."

With most of Tuesday's events indoors or under cover, there was less worry about the precarious weather, which has ranged from unseasonably cool to downright foul, as rain poured during Sunday's grand procession of boats down the Thames.

Among the early arrivals at the cathedral were four women from Jedburgh, a Scottish town near the English border, who displayed a large Union Jack flag.

"We've been saving for three years to come here," said Marion Kingswood, 69. "Apart from the royal wedding, there's been nothing like it. Sixty years is such an achievement."

Barry Dandy, 71, and his wife flew in from Sydney, Australia, to join in the celebrations.

"They showed a preview of the River Pageant on Australian television and my wife said, `I'd love to be there,"' Dandy said. "It's been great to take part in the celebrations."

The Very Rev. David Ison, the dean of St. Paul's, said Philip would be remembered in the prayers.

"We were already going to say prayers for the Duke of Edinburgh and it will have an added poignancy as we hope he will make a swift recovery," Ison said.

A few anti-monarchist demonstrators were outside the cathedral with slogans including "Republic Now!" or, in a shot at the cost of maintaining the monarchy, "9500 Nurses or 1 Queen?"

Royalists in the crowd responded noisily, chanting "God save the queen!"

Along the parade route, 70-year-old Margaret Barker said Philip's absence would put a damper on the queen's day.

"She's got the rest of her family around her but when you think of all the planning there's been for this and how long they've been together, it seems very sad that he can't be with her today," Barker said.

Tourist Cassandra Past, 20, from New York, said she expected the queen to keep her chin up despite worries about her 90-year-old husband. "She is the queen, and she sort of has to put on a good face for her country and her people," Past said.