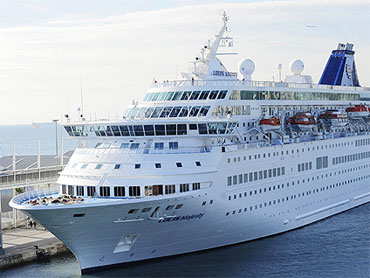 The Mediterranean was heaving as the 68-year-old Italian stood in the cruise ship lounge. A moment later a monstrous wave shattered the windows and sent shards into her head, leaving her bleeding on the floor and calling out for her husband.

Torrents of water gushed into the Louis Majesty, pouring through several floors of the ship.

"I thought I would end up in the sea, drowned," said Anna Lita, who had a black eye and bandages on her head and hand Thursday.

The three waves that struck the Cypriot-owned ship Wednesday claimed two lives off the coast of northeast Spain. The vessel was carrying 1,350 passengers and 580 crew members, from a total of 27 countries.

Lita's husband Carlo, 69, who had been beside her on a sofa, was thrown in the air and ended up with five stitches in the head and a leg injury.

Another Italian, Giovanni Zanoni, said that after the waves blew out the windows of the lounge, the ceiling caved in and pandemonium broke out.

"People were screaming, panicking. They were grabbing life vests," Zanoni said. He said he saw one huge shard of glass hit a man in the face, killing him. It took a while to find the body because he was under the wreckage of the ceiling, Zanoni said.

The ship's owner and operator, Louis Cruise Lines, said the vessel was struck Wednesday by three "abnormally high" waves more than 33 feet high that broke glass windshields in the forward section on deck five, which is one of 10 used by passengers. Two people died and 14 were slightly hurt, the company said.

Large waves are not rare in the Mediterranean, but ones that size occur only once or twice a year, said Marta de Alfonso, an oceanographer with the Spanish government.

This accident happened in an area of the Mediterranean called the Gulf of Leon, which is known for big waves when storms hit.

The ship was on a 12-day cruise from the ports of Genoa and Marseilles in the western Mediterranean, calling at Tangiers, Casablanca, Tenerife, Lanzarote, Cadiz, Cartagena, Barcelona and had been due to return to Genoa on Thursday.

Passengers said the weather was terrible as they left Cartagena in eastern Spain Wednesday, and the captain announced he was skipping a planned stop in Barcelona and heading straight for Italy.

"I remember when the wave hit," Lita said. "It broke all the windows and I was rolling and rolling and did not stop calling out for my husband."

Amateur video footage taken by a passenger and aired on Spanish television showed a huge, foamy wave hitting what appeared to be the lounge area, sending water gushing in and people scurrying for safety.

"Suddenly we saw a wave that went up above our level, and I said to my husband, 'tonight we will not have to wash the windows,"' said Claudine Armand of France, who was in her cabin at that point. "Right then we heard we heard a loud noise, and it was the wave that hit us."

"When we came out of the room we saw the wave had flooded everything," she told Associated Press Television News.

Pierre Languillon, also of France, said damage was extensive and he saw many people with superficial injuries.

"They called for doctors, as many doctors as there were. Luckily nothing happened to us, but I think we averted a catastrophe."

Louis Cruise Lines spokesman Michael Maratheftis said 14 passengers who suffered only minor injuries were taken to hospital as a precaution.

Arrangements have been made to fly all passengers home Thursday and the ship will carry on with its normal schedule later this month after repairs are completed, he told the AP from Cyprus. By the end of the day most will have left the ship.

Maratheftis said the two dead passengers - a German and an Italian - suffered fatal injuries from the glass shards and ripped-out window frames and furniture.

"It was three waves, one after the other. The damage was done by the second and the third waves. We are talking about waves that exceeded 10 meters in height. This was unforeseen and unpredicted because the weather was not really that bad," Maratheftis said.

De Alfonso said there was in fact a big storm in the area at the time and the waves might have been stirred up by fierce winds. Waves often come in threes, she said.

Another passenger, Jean Claude Fery, of Marseille, said he was in his cabin looking out the porthole at tremendously turbulent seas. "I have never seen waves so big. It was unbelievable."

A Louis Cruise Lines statement said the waves smashed windows in a public area on deck 5 on the forward part of the vessel.