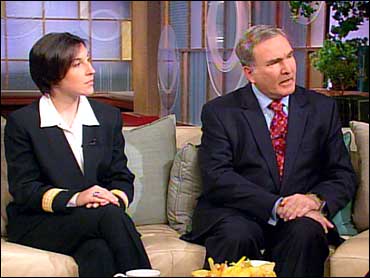 George Smith was on his honeymoon when he vanished from a cruise ship last summer.

His wife and family believe Smith was murdered, and they have accused the Royal Caribbean cruise line of trying to cover-up the crime to protect its image.

Last week, The Early Show spoke with the Smith family.

Investigators continue to work on the case, but the Smith family says they would have an answer already if Royal Caribbean hadn't impeded the investigation to protect its image.

Bree Smith says information from their local congressman about blood in George and Jennifer's cabin helped convince the family that George had been murdered and that Royal Caribbean was covering it up.

The captain of the ship has said that George and Jennifer drank heavily that night, something George's family acknowledges.

In a report filed by the ship's captain, he wrote: "probably lost his balance and fell overboard. Probably under the influence of alcohol."

To answer the questions raised by the Smiths and also to talk about the accusations leveled by Jennifer Hagel-Smith, George's bride, Royal Caribbean Chairman and CEO Richard Fain and Royal Caribbean's guest relations manager from that cruise, Marie Breheret, spoke with Hannah Storm.

"Thank you for giving us a chance to come and talk to you, because I think it's important to correct some of the things that have been put out there," Fain said. "Some of those you mentioned aren't, in fact, what happened at the time.

"As soon as we heard about this terrible tragedy, the captain acted very quickly. He responded. He called the local authorities. He called the FBI. They immediately sealed off the area. He stationed a guard outside the door to make sure that no evidence was disturbed. He did, actually, express his own view based on his experience, that it may well have been an accident. He didn't rule out foul play, as has been said. What he said was, based on his experience, and the captain — the cabin, rather — did not show signs of a struggle. There was no blood trail as some people have said."

But there was blood in the cabin?

"There was nothing that a normal observer could see when they came in," Fain said.

"There was quite a bit of blood on the overhang. You yourself said it was a security problem. People were leaning over to try to take pictures," said Storm.

"There was blood on the canopy and that blood appeared to have come, at least to a lay person — we're not the investigators," Fain said. "We turned this over to the FBI. We turned this over to the authorities. We gave them all that information. The blood on the canopy was consistent either with foul play or with a perfectly innocent accident. And he — and I am sorry that he speculated, but it didn't affect the investigation in any way."

The Early Show talked with lawyers for the family and the widow and they both said the FBI told them that Royal Caribbean characterized this to them as an accident and had Royal Caribbean alerted them that there was the possibility of foul play, they would have conducted this interview — or this investigation differently from the outset.

"I don't believe the FBI would have done anything differently. The FBI is a very professional organization," Fain said.

How was it characterized to the FBI?

Had they been alerted of the possibility of foul play, might they have conducted the investigation differently?

"They were alerted of the possibility of foul play," Fain said. "We are very careful we don't characterize it. I've known the captain for many years. He is a professional person. He is a captain, he did express his view. That view was reasonable. But he didn't say that there was no evidence of foul play and he didn't rule that out as a likely alternative."

Marie Breheret was with the widow, Jennifer Hagel-Smith, the next day. She was found in the spa and was taken to Turkey the next day.

"She seemed tired and confused and she said that it was like a dream and she would wake up and George would be there," Breheret said.

"It must have been a terrible time for her," Fain said. "We felt that she was going to be — she must be in distress. Her husband is missing. Obviously, she's going to be a likely person that the authorities will want to talk to. We knew that. So we did try and make sure she was well looked after."