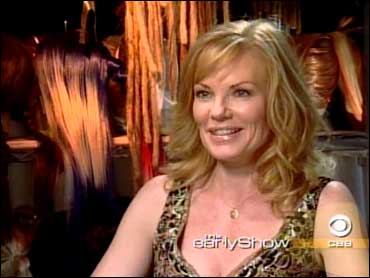 Combine 21st century crime-solving techniques with Cirque De Soleil, one of Las Vegas' most popular and extravagant shows, and the result is the season premiere of "CSI: Crime Scene Investigation."

The season opener takes place on the Vegas set of Cirque De Soleil, which with all its tiers and levels makes it the perfect scene for a crime, according to "CSI" star Marg Helgenberger. It turns out to be the site for a murder of an aspiring actor — a crime that confuses reality and the stage, and plays tricks with star Billy Peterson's character's mind.

"I think it's tied into his needing to figure out explanations for everything," Peterson, who plays Gil Grissom, told The Early Show co-anchor Julie Chen. "I think he has a belief in the mystical. But he would never share that and, so, he is interested in finding out what the reality is all the time, and what really happens, and how can I explain this away."

The show is usually in Southern California, but Peterson, who is also the executive producer, says there's no better place to kick off the seventh season than Nevada.

"It's always been a big, huge part of the show and it helps for us to be here," he said.

"There's an authenticity that it brings to the show that, for me, you know, I like to make it as real as I can anyway," Eads said.

While shooting the show, the "CSI" cast members said they were mesmerized by the Cirque De Soleil acrobatics and the vast setting in which they took place.

"Just being in this theater is remarkable for me," Peterson said. "I come from theater, but I come from little theaters."

The premiere also features a performance by singer-songwriter John Mayer, whose music proves to be somewhat seductive for Helgenberger's character Catherine Willows, and George Eads character Nick Stokes, who engaged in some late-night dancing.

"It wasn't you know, 'Saturday Night Fever,' " Eads said. "We weren't sliding on our knees or anything. It was just a little sexy kind of dancing, and I will dance with Marg anytime."

"Well, it was actually my idea," Helgenberger said. "In six years, we never just have fun, you know? And of course, it doesn't last long."

"I'd like to do shows backstage at a Dolly Parton concert, you know, and have Dolly in it as dolly," he said. "Dolly would do it, I'm sure ... We'll have to suspect her for a while."