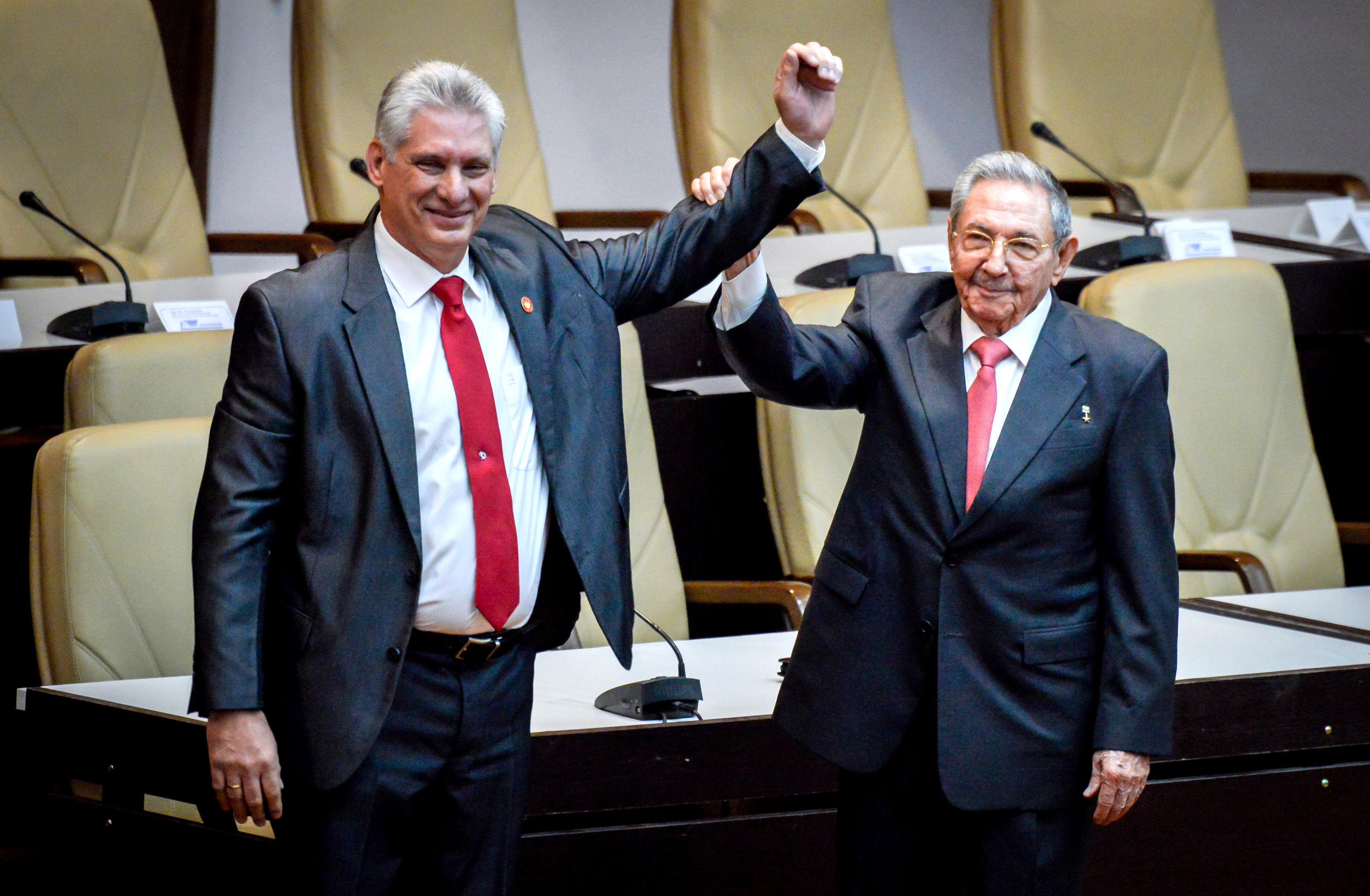 HAVANA -- Raul Castro said Thursday that he expected 57-year-old Miguel Mario Diaz-Canel Bermudez to serve two five-year terms as president and eventually take Castro's place as head of the Communist Party, potentially dominating Cuban politics until 2031. It was the first time Castro has laid out a clear vision for the nation's power structure after his retirement or death, a vision in which Diaz-Canel is Castro's true successor as total leader of Cuba.

Castro left the presidency Thursday after 12 years in office when the National Assembly approved Diaz-Canel's nomination as the candidate for the top government position. Diaz-Canel told the nation that Castro, 86, would remain the country's ultimate authority as head of the Communist Party.

CBS News correspondent Manuel Bojorquez reports from Havana that many on the island do not necessarily foresee any drastic changes, and there are some in the younger generation that were hopeful of some expansion of limited economic reforms and more opportunities. They don't necessarily see it happening this time around although there are some that remain hopeful.

"That's bad because we have been like this for 50 years," Galvez said.

She has seen what life is like outside of Cuba because in 2015, she visited Chicago as part of a cultural exchange program. Since then, the Trump administration clamped down on allowing tourists from the U.S. to the island.

Galvez says booking for her band "Acana" went from once a week to once a month.

In the U.S., Cuban exiles and Cuban-American leaders see this as not a true election at all, Bojorquez reports. They see it as a mere passing of the torch from one dictator to another with practically no chances of improving relations between the United States and Cuba.

Speaking after Diaz-Canel, Castro said he expected the younger man to become first secretary of the party after Castro retires from the position in 2021.

"From that point on, I will be just another soldier defending this revolution," Castro said.

Castro indicated that he expected Diaz-Canel to serve two five-year terms as head of the party, saying he envisioned Diaz-Canel guiding his own successor for three years after leaving the presidency in 2028.

In his half-hour speech to the nation, the new president pledged to preserve the island's communist system while gradually reforming the economy and making the government more responsive to the people.

"The people have given this assembly the mandate to provide continuity to the Cuban Revolution during a crucial, historic moment that will be defined by all that we achieve in the advance of the modernization of our social and economic model," Diaz-Canel said.

He said Cuba was, as always, prepared to negotiate with the United States but unwilling to cede to any of Washington's demands for internal change.

He emphasized that reforms would follow a 12-year-plan laid out by the National Assembly and Communist Party that would allow moderate growth of private enterprise while maintaining the important sectors of the economy in the hands of the state.

With Castro watching from the audience, Diaz-Canel made clear that he would defer to the man who, along with his brother Fidel Castro, founded and ruled for six decades what has become of one of the world's last communist governments.

"I confirm to this assembly that Raul Castro, as first secretary of the Communist Party, will lead the decisions about the future of the country," Diaz-Canel said. "Cuba needs him, providing ideas and proposals for the revolutionary cause, orienting and alerting us about any error or deficiency, teaching us, and always ready to confront imperialism."

Facing biological reality but still active and apparently healthy, Raul Castro is stepping down as president in an effort to guarantee that new leaders can maintain the government's grip on power in the face of economic stagnation, an aging population and increasing disenchantment among younger generations.

Diaz-Canel's half-hour speech offered most Cubans by far their greatest exposure to the man long expected to assume the presidency.

Most Cubans know their first vice president as an uncharismatic figure who until recently maintained a public profile so low it was virtually nonexistent. That image changed slightly this year as state media placed an increasing spotlight on Diaz-Canel's public appearances, including remarks to the press last month that included his promise to make Cuba's government more responsive to its people, language he echoed on Thursday.

Diaz-Canel gained prominence in central Villa Clara province as the top Communist Party official, a post equivalent to governor. People there describe him as a hard-working, modest-living technocrat dedicated to improving public services. He became higher education minister in 2009 before moving into the vice presidency.

In a video of a Communist Party meeting that inexplicably leaked to the public last year, Diaz-Canel expressed a series of orthodox positions that included somberly pledging to shutter some independent media and labeling some European embassies as outposts of foreign subversion.

But he has also defended academics and bloggers who became targets of hardliners, leading some to describe him a potential advocate for greater openness in a system intolerant of virtually any criticism or dissent. International observers and Cubans alike will now be scrutinizing every move he makes.

Two years after taking over from his ailing brother in 2006, Castro launched a series of reforms that expanded Cuba's private sector to nearly 600,000 people and allowed citizens greater freedom to travel and access to information. He has failed to fix the generally unproductive and highly subsidized state-run businesses that, along with a Soviet-model bureaucracy, employ three of every four Cubans. State salaries average $30 a month, leaving workers struggling to feed their families, and often dependent on corruption or remittances from relatives overseas.

Castro's moves to open the economy have largely been frozen or reversed as soon as they began to generate conspicuous shows of wealth by the new entrepreneurial class in a country officially dedicated to equality among its citizens.

The assembly also approved another six vice presidents of the Council of State, Cuba's highest government body. Only one, 85-year-old Ramiro Valdez, was among the revolutionaries who fought with the Castros in the late 1950s in the eastern Sierra Maestra mountains.

State media went into overdrive Wednesday with a single message: Cuba's system is continuing in the face of change. Commentators on state television and online offered lengthy explanations of why Cuba's single-party politics and socialist economy are superior to multi-party democracy and free markets, and assured Cubans that no fundamental changes were occurring, despite some new faces at the top.