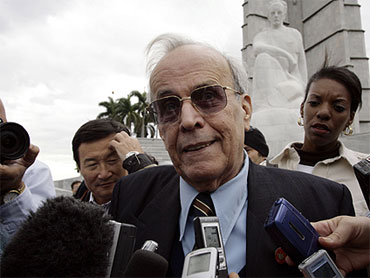 A senior Cuban official said Wednesday that an American government contractor detained in Cuba for more than a month was "working for American intelligence."

Parliament leader Ricardo Alarcon said the man is under investigation but has not yet been charged. Neither government has identified the man who was arrested on Dec. 4 on suspicion he was handing out communications equipment to opposition groups.

"There is a new institution in the United States which is made up of agents, torturers and spies that are contracted as part of the privatization of war," Alarcon said. "This is a man who was contracted to do work for American intelligence services."

The man was detained as he attempted to board a plane leaving Cuba, but Cuban officials did not grant him access to consular officials from the U.S. Interests Section - which Washington maintains in Cuba instead of an embassy - until Dec. 28.

The State Department has said that he was working as a subcontractor for the Maryland-based economic development organization Development Alternatives Inc., and the company's president has said he was part of a USAID program intended to "strengthen civil society in support of just and democratic governance in Cuba."

Alarcon, who made the comments at an event announcing Cuban municipal elections for later this year, would not give any details of the man's condition, or say where he was being held.

"I can assure you that he is much better, much better than the victims of those (U.S. government) contractors around the world," Alarcon said, a reference to evidence that some terror suspects were tortured by American contractors and intelligence agents.