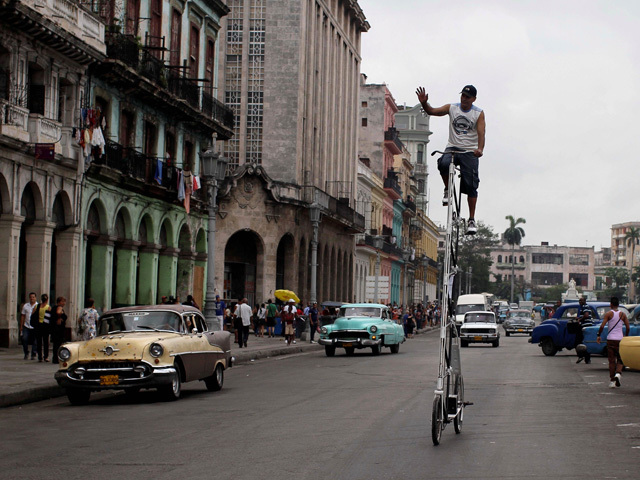 (AP) HAVANA - Many people would be leery of cycling through chaotic downtown Havana, sharing its narrow, potholed streets with the darting scooters, incorrigible jaywalkers and hulking 1950s Detroit classics that clog every byway.

Felix Guirola does it every day, and not on just any bicycle.

Guirola rides 13 feet above the ground atop his homemade super-tall bike, peering over pickup trucks and even buses and without a helmet or other protective gear to break a fall.

"I feel good up high. I don't get nauseated or dizzy, nothing like that," the 48-year-old Guirola said. "Up there I see the scenery better. I feel relaxed. There's more of a breeze, I breathe it and I feel freer."

Since Guirola sold his home in the central province of Ciego de Avila and moved to Havana in November, the odd spectacle of him pedaling around town at eye-level with second-story apartments has become a daily occurrence. But neighbors still turn their heads and gawk, and smiling tourists whip out digital cameras.

"It's crazy. It must be difficult to keep his balance up there," said Rafael Trejo, a 55-year-old motorist. "And when he comes to a stoplight, he must be a ninja to be able to climb down from there."

In fact, Guirola more resembles a daring child on a jungle gym than a deadly assassin. To mount, he has other people stabilize the bike while he scrambles up the metal frame. When a red light looms, he starts lowering himself while the bike's still in motion, leaps to the ground and grabs the frame before it can topple.

"It's easy. ... It's perfectly normal for me," said Guirola, an athletic man of medium stature who practiced judo and boxing in his youth. "I never get scared, nor have I fallen, and I obey all traffic laws."

Guirola has been riding tall since 1983, when seeing a tandem bike inspired him to build up instead of out. He said his first tall bike measured 5.3 feet, and they got progressively taller until five years later he was riding 18 feet in the air at Ciego de Avila carnivals.

That would put Guirola in the ballpark of the world record.

A representative of Guinness World Records told The Associated Press in an email that it currently recognizes as the world's tallest rideable bicycle an 18-foot, 2.5-inch contraption that was ridden more than 1,000 feet in 2004 by Canadian Terry Goertzen.

Guirola is nearing completion of another 18-footer to use in Havana, and he's planning a 26-footer sometime in the future. But he said he was returning to Ciego de Avila this week to work out some residency issues, so he's not planning an immediate attempt to mount the taller bike.

His dream is to earn a living from the bike through tips or performance payments, and along the way honor the memory of his disabled sister, who died two decades ago. Guirola's sister Eneida had a brain tumor that was operated on when she was in her early 20s, and afterward had problems with balance and was unable to walk without assistance. After living that way for about a decade she died at age 33.

"I told her that one day with my giant bike I would make enough money to buy her everything she needed for her disability," Guirola recalled tearfully. "Eneida is no longer around to see me, but I want to keep my promise. And if one day I win an award, I'll give part of the money to help disabled children in Cuba like my sister."

For now, the occasional tip isn't enough to pay the bills, and he lives off savings and the meager income from his wife's privately run cafeteria.

A welder by trade, Guirola has used the proceeds from the sale of his home to buy parts for the new bike he is building. A nearby workshop charges him a nominal fee for a space to store and work on the bike, which he has yet to try out even though it lacks only the finishing touches.

"I haven't ridden the 5.5-meter one yet," said Guirola, "because I want to do it when it's painted and all pretty and try to win a Guinness record."