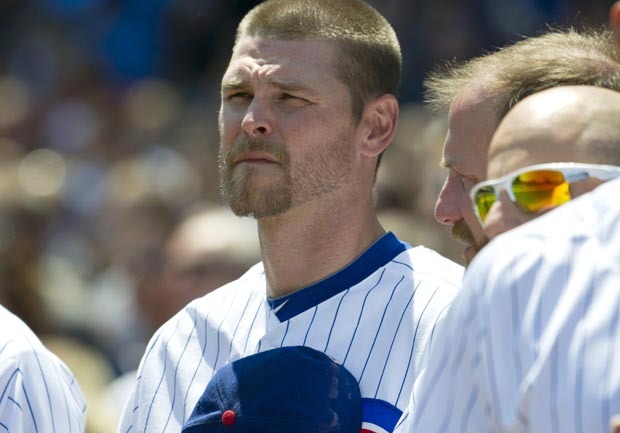 The Chicago Cubs reliever came in during the eighth inning of Friday's game against the Chicago White Sox.

He struck out Dayan Viciedo before he was replaced. His teammates joined him on the mound to congratulate him and he left to a rousing ovation. He was hugged by his son as he reached the dugout and moments later, he came out for a curtain call waving his cap to the fans at Wrigley Field as James Russell threw warmup pitches.

Wood was expected to retire after Friday's game.

The Cubs' No. 1 selection in the 1995 amateur draft was a 20-year-old rookie when he delivered one of the greatest pitching performances of all time. On May 6, 1998, he allowed only one hit, a third-inning single by Ricky Gutierrez, in a 2-0 victory over the Houston Astros. It was his fifth major league start.

As the game progressed and with rain falling, Wood's stuff was never better. Throwing fastballs at 100 mph and with his slider dipping around the Houston bats, Wood didn't walk a batter, hit one with a pitch and gave up that lone infield single in the third on a ball Cubs third baseman Kevin Orie couldn't come up with.

When Wood fanned Bill Spiers in the ninth for his 19th strikeout, Wood tied the National League record. He struck out Derek Bell to end the game and tie Roger Clemens' major league mark (the two still remain the only MLB pitchers to do it in nine innings).

"I didn't know how many strikeouts I had. I knew I had already given up a hit in the third inning," Wood later recalled. "I was just trying to get my first complete game."

He added: "I'll never forget it. It's a great moment in my life and my career."

Wood said his slider was his main weapon that day as he struck out the side in the first, fifth, seventh and eighth innings, and fanned two each in the second, fourth and ninth, and one each in the third and the sixth. Wood threw 122 pitches, 84 for strikes, and got a congratulatory phone call from Clemens afterward.

"The age, as hard as he threw, the command and the poise that he had on the mound, nothing bothered him that day," Gutierrez recalled. "After the game, we just took our hats off to him. He did a great job. There's nothing you can take away from him."

In his next outing, Wood struck out 13 in seven innings, setting a major league record for strikeouts in back-to-back games. Clemens and Nolan Ryan, whose No. 34 Wood wore on his back, are fellow Texans and the pitchers who most inspired the 6-foot-5, 225-pound Wood, who is from Irving, Texas.

Wood finished the 1998 season ranked third in the NL in strikeouts and won the NL Rookie of the Year award. He missed the final month with a sore right elbow, then had reconstructive elbow surgery the next April, starting a run of arm and shoulder problems that undercut his career.

He had three double-figure victory seasons from 2001-03, and in 2003 he helped the Cubs reach Game 7 of the NLCS, where he was the losing pitcher despite hitting a home run against the Florida Marlins.

Shoulder problems nearly ended his career, but he made a stirring comeback and a successful transition to the bullpen, emerging as the Cubs' closer in 2008 and converting 34 of 40 save opportunities.

Steve Stone, the Cy Young winner who has been a broadcaster for both the Cubs and White Sox, said Wood threw across his body and that put undue stress on his arm.

"Kerry Wood came up with the highest of expectations. He came up with as good of stuff as anyone who ever came into this league. You talk about (Stephen) Strasburg and the impact (Doc) Gooden had, the reality is Kerry's stuff was better than both of those guys," Stone said.

"Kerry had the 100 mph fastball. He had an unhittable curveball. He had an unhittable slider. And that day in his fifth major league start he got them all over the plate. He didn't walk anybody. It was absolutely phenomenal," Stone said. "I think the hopes and prayers of the Cubs fans, seeing that, said, `this is a guy that's going to rival Ferguson Jenkins.'... But it was a fatal flaw in his delivery that was his undoing."