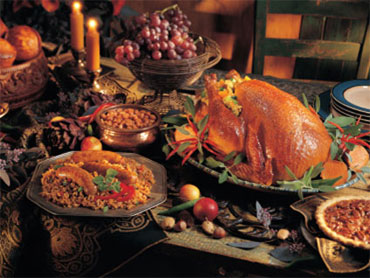 Holidays mean indulgence, but you can thoroughly enjoy a delicious Thanksgiving dinner without depriving yourself, even while feasting!

The key, explained registered dietican Cynthia Sass on "The Early Show," is simply making smarter choices at the table - you might say, by picking the best of the worst!

Sass showed how to shave more than 1,000 calories from a typical 2,000 calorie Thanksgiving meal and still dig into scrumptious holiday fare:

Celebrating Abundance, But without the Waste

4 pigs in a blanket or 5 club crackers with 5 slices sharp cheddar cheese?

It's the pigs in a blanket, and there's a big difference. Even though pigs in a blanket sound like complete calorie bombs, 4 minis pack 270 calories vs. 600 in the cheese and crackers! As a nutritionist, pigs in a blanket aren't on my good-for-you list, but 330 calories is a big savings, especially when you consider that watching football on TV only burns about 70 calories an hour.

If you love dark meat, going for the drumstick will save you a little -- 240 calories compared to 270, but because much of what's in a drumstick is bone, and it takes longer to eat, you may feel like you're eating more. And you may use less gravy eating a ladle less (half cup) less saves another 60 calories.

It's the latter. It may be creamed, but the spinach has fewer than 180 calories, as opposed to 280, so this choice saves a quick 100 calories. That may not sound like much, but you'd have to take a 25 minute walk after your feast to burn 100 calories!. And if you want to trick yourself into cutting more, take smaller forkfuls and put your fork down between bites; studies show it will help you eat less without feeling restricted.

It's the latter. They're both made with veggies and nuts, but the Brussels sprouts will cost you 165 calories compared to 220 in the green beans. And if you leave five pecans on your plate, you slash another 50 calories.

Again, it's the latter: 250 calories instead of 500. Another pumpkin advantage: The typical topping is whipped cream, rather than ice cream, which is more typical of pecan. A half-cup scoop of premium vanilla ice cream tacks on an extra 250 calories as opposed to just 25 for 2 Tbsp whipped cream. Leave the crust behind and you'll save an additional 110 calories per slice.

Cup coffee with 1 shot Baileys or cup of spiked eggnog

It's the coffee. The eggnog packs 400 calories; the coffee with Baileys 125. Saving calories on your after-dinner drink can be especially important, since alcohol can act as an appetite stimulant, causing you to eat more desserts or go back for seconds.